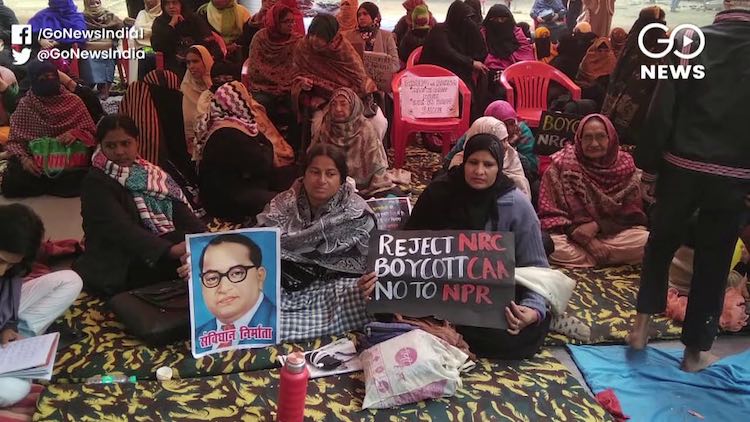 Protests by women against the controversial Citizenship Amendment Act (CAA) — which discriminates on the basis of religion — in Delhi’s Shaheen Bagh have entered their 32nd day.  After the directive of the Delhi High Court, Delhi Police’s efforts have failed. The women of Shaheen Bagh are not ready to end their protest, which is being called ‘historic’ and now, people from various organisations and religions are also reaching there to stand in solidarity with them. Also Read: Under Fire Amazon Will Export Goods Worth $10 Bn From India By 2025

Farmers who arrived in Delhi from Punjab organised a ‘langar’ for the protesting women of Shaheen Bagh on Tuesday.  The impact of the display of courage by these women is now being felt in other cities of the country. Women in hundreds have sat down in protest against the CAA in Kanpur, Prayagraj, Gaya, Patna and Kolkata. Hundreds of women have opened a front against this law and organised a protest in Prayagraj’s Mansoor Ali Park. Despite the strict stance of the Prayagraj Police, women of the city have been successful in starting the protest and now, women from Kareli, Shah Ganj, Roshan Bagh and other nearby areas are congregating here. Women have been protesting at the Mohammad Ali Park in Kanpur’s Chaman Ganj area since January 6, on the lines of Shaheen Bagh. Speeches against the CAA are delivered here each evening from 4 p.m. to late at night. Women here are not backing down despite the tough stance of the Kanpur Police. In Bihar, protests on the same lines are also underway in Patna’s Sabzibagh and in Gaya district. Women have been protesting since January 7 in Kolkata’s minority-dominated Park Circus area. These women are not ready to bow down before the CAA, National Population Register (NPR) and National Register of Citizens (NRC). Muslim women in Delhi’s Khureji area have also begun protesting on the lines of Shaheen Bagh. Women protesters have alleged that Delhi Police tried to sabotage their protest site on Tuesday midnight and made a bid to remove them. The protest at Khureji continues for the time being, with people in large numbers reaching there. In Maharashtra’s Pune, women who have been protesting against the CAA for the past five days are raising slogans for freedom from the law. They are also conducting candlelight marches to create awareness about the issue.

#Womenprotesters of #ShaheenBagh who have been protesting for the last 32 days against the #CitizenshipAmendmentAct inspire other women protesters in several cities including #Kanpur, #Allahabad, #Gaya, #Patna and #Kolkata@ShahnawazMalik_#CAA_NRCProtests #CAA_NRC_Protests pic.twitter.com/klSTbQSXb6