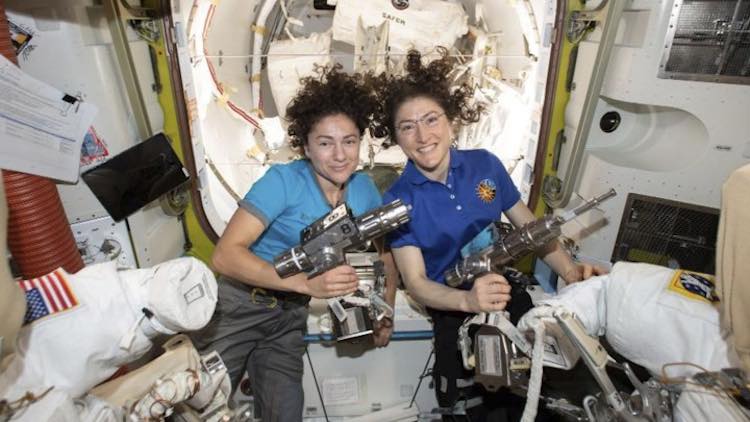 The two astronauts ventured outside the International Space Station at about 7:50 a.m. to make an urgent repair to its power system. They concluded the spacewalk 7 hours and 17 minutes later, just before 3 p.m. "Another milestone in human space exploration is officially complete!' said a tweet from NASA.

Today, history was made as @Astro_Jessica and @Astro_Christina successfully completed the first #AllWomanSpacewalk! For more than 7 hours, the duo worked in the vacuum of space to conduct @Space_Station maintenance. Get details: https://t.co/9y6Dq9OR7B. pic.twitter.com/2ZDXA2E5NE

Originally, NASA had planned an all-female spacewalk in March. But that event — which was to have involved Koch and NASA astronaut Anne McClain — was scrapped because there weren’t enough spacesuits of the right size available on the station. NASA was criticized for not having enough uniforms for two women to participate in a spacewalk together.  Every woman who has ever suited up for space had a male counterpart suiting up with her. No two women have spacewalked together, making today’s event a big first for NASA — and the world. This is the 221st spacewalk in support of the space station's maintenance and assembly. Since cosmonaut Svetlana Savitskaya became the first woman to do a spacewalk in 1984, women have participated in 42 spacewalks. Of the 15 women who have done spacewalks, 14 have been NASA astronauts.