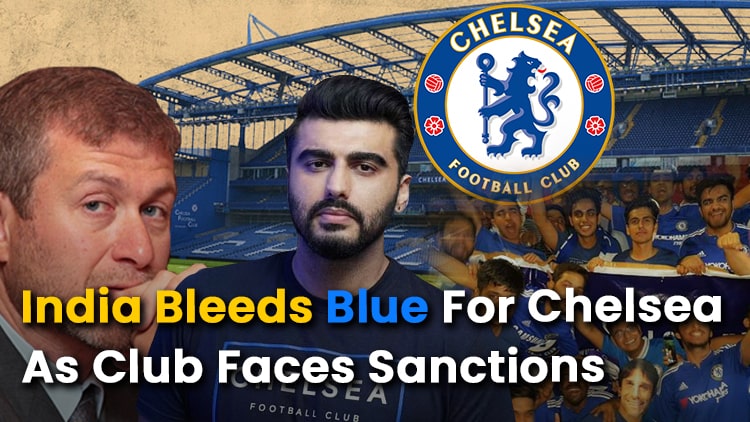 Chelsea Fanbase In India Chelsea Football Club (CFC) is one of the most popular football clubs in the world. In Forbes magazine's ranking of the world's richest football clubs for 2022, the London club is ranked seventh.
Also Read:
US Says India Is ‘Partner Of Choice’, Official Says Can Help Transition From Russian

Undoubtedly, a club of this importance has millions of followers not just in the United States, but also across the world. India, as one of the world's largest and most populous countries, is home to the world's largest football fan base. The club is England's third wealthiest football team. Chelsea's net worth is estimated to be $3.2 billion, with $520 million in earnings the prior year, according to Forbes.com. The two clubs with the most fans in India are Manchester United and Chelsea FC. Chelsea is always trying to increase their footprint in India as a result of rising support. India is ranked fifth among the top ten nations with the most Chelsea supporters on Facebook, according to the Daily Star. The popularity of the English Premier League (EPL) as a whole also contributes to Chelsea's large fan base in India. The EPL was also the most televised league in India around 2005. This was when India's interest in international club football was only beginning to grow. Chelsea had begun to play exceptionally well about the same time. Since 2004, Chelsea has had consistent success, which has resulted in a massive expansion in the club's Indian fan base. Chelsea, also known as The Blues, has appeared in the UEFA Champions League 17 times since their debut in 1999. They have now won the UCL twice, in 2011-12 and 2020-21. Chelsea's greatest successful time has been the last twenty-five years, during which they have won five Premier League championships, seven FA Cups, four League Cups, two UEFA Champions League titles, two UEFA Europa League titles, two UEFA Super Cups, and one FIFA Club World Cup. Thus, one of the reasons that fans in India support Chelsea is because of their magnificent trophy cabinet. Frank Lampard, John Terry, Didier Drogba, Fabregas, and Eden Hazard were among the most famous players in the world while Chelsea was gaining popularity in India. In India, these players are revered as gods by Chelsea followers. Arjun Kapoor – India’s Brand Ambassador For CFC The English football giants signed Bollywood sensation Arjun Kapoor as India's brand ambassador for CFC in October 2019. Arjun manages the club's fan engagement efforts in India, according to the club. He also appeared in the CFC's Out of the Blue with Arjun Kapoor (2019) online discussion show series. Arjun Kapoor spoke with Frank Lampard on his show. On the show, Lampard remarked about his trip to India and the support of Chelsea supporters there: "I haven't been to India yet, but I'd like to go. I'm aware that we have a Large fanbase in India. We really appreciate it and will participate even more in the future because we are grateful." Delhi Capital Blues: Fanclub Of Chelsea In India The Delhi Capital Blues (DCB) is one of India's most active and well-known fan clubs. It was able to get CFC recognition in a relatively short period of time, which is a remarkable achievement. DCB presently organises football competitions and charities to foster youngsters for a better future in life as a result of the expansion in membership throughout time. They also collaborate with other small and large cities to urge them to form their own fan clubs. Following an increase in the number of fans, Chelsea FC has formed a team specifically for India. Chelsea Amid Russia-Ukraine Conflict The invasion of Ukraine by Russia has sparked international sanctions. On the 117th anniversary of Chelsea's founding, fans were given an unwanted present. Sanctions imposed by the British government on Russian owner Roman Abramovich further added to the team's increasing reputation as a football pariah. Chelsea will operate under a special "Russia Regulations" licence until the conclusion of the season on May 31, which restricts the team from selling new tickets or goods, as well as signing new players, among other limitations. Sponsors of the club are responding in their own unique way: Three, the telecoms company, declared that it will stop sponsoring Chelsea and remove its insignia from the team's uniforms. "We understand that our decision will have an impact on the numerous Chelsea supporters who are passionate about their team," Three stated. "However, we believe it is the proper thing to do, given the circumstances and the government sanction in place." In the midst of all of this, Bloomberg claimed that certain US investors and private equity groups had expressed interest in purchasing Chelsea, a club worth roughly 1.5 billion pounds. After Russian owner Roman Abramovich was sanctioned, a fan described a "surreal moment" when he bought the last Chelsea jersey at the club shop before it shuttered, with others expressing their concern about the limitations. Outside the stadium, fans expressed their "nervousness" and "worry" over the penalties, though majority were concerned about Chelsea's long-term status. UK Parliamentary Committee: Chelsea fans Should Be Allowed To Buy FA Cup Tickets Chelsea fans should not be disadvantaged by the club's owner's penalties and should be able to purchase tickets for the FA Cup semi-final against Crystal Palace next month, according to the chair of a UK parliamentary committee. Last week, the club stated it was in talks with the Office of Financial Sanctions Implementation, but that it wouldn't be able to make the necessary changes to the licence in time to sell tickets for the quarter final. When Reuters contacted the FA, they declined to comment. Abramovich placed Chelsea up for sale before the British government-imposed penalties on him, essentially handing the billionaire ownership of the club. Raine Group, a US bank, is in charge of the club's sale. On March 24, the shortlist of bidders was whittled down to three.