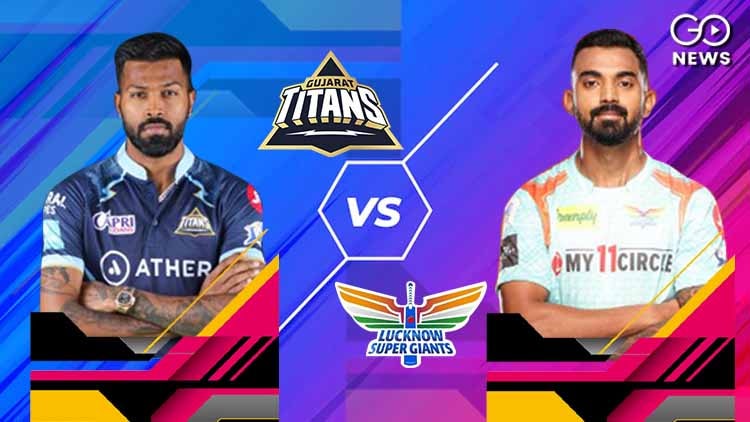 The first match between the two IPL debutants, Lucknow Super Giants and Gujarat Titans, was a thrilling encounter at Mumbai's Wankhede Stadium on Monday. Gujarat achieved a stunning 5-wicket win with two balls to play, with to some late hitting from David Miller (30 off 21), Rahul Tewatia (40 not out off 24), and Abhinav Manohar (15 off 7) to start their season on a high note. The Titans got off to a poor start when Dushmantha Chameera removed Shubman Gill in the opening over while chasing 159. Chameera delivered an outside off stump delivery that Gill looked to lift on the off-side, but it got off the bottom of the bat and flew high into the air, where Hooda made a well-judged catch.
Also Read:
Bharat Bandh: Joint Platform Of Trade Unions Plan 2 Day Strike On Labour, Farmer Issues!

In his second over, Chameera struck again, removing Vijay Shankar. With a yorker on off stump at 145 KPH, Sri Lankan spinner Vijay Shankar was late to put his bat down and got the bottom edge to shatter the stumps. Krunal Pandya removed his brother Hardik in the 11th over as the Gujarat batters' partnership became stronger. As Hardik swung but failed to get it on the middle of the bat, Krunal bowled on the middle stump, and the ball soared high in the air to long-off, where Manish Pandey took a safe catch. Gujarat were 78/4 after 11. 5 overs, having lost captain Hardik Pandya, Matthew Wade, and Shubman Gill in the chase for 159. Miller and Tewatia, on the other hand, were up to the challenge. Gujarat's pie was topped off by youngster Abhinav, who got in on the act with some lusty strikes near the end. Mohammad Shami, a bowler for the Titans, had earlier taken the wicket of LSG captain KL Rahul with the first ball of the game. Shami then went on to take down the LSG top and middle order by taking three wickets in three overs.  LSG found their own heroes after being down to 29 for four in the fifth over. Deepak Hooda (55) and Ayush Badoni (54) produced responsible half-centuries to help the side to a solid 158/6 in 20 overs. LSG skipper Rahul was hit with a deadly outswinger from Shami, who could only edge it to wicketkeeper Mathew Wade. On review, the TV umpire overturned the on-field ruling of not out. Shami knocked back Rahul's partner Quinton de Kock's (7) middle stump after he faced a length delivery that was bowled between full and excellent length. Shubman Gill, another Titan, made his presence felt in the encounter with a stunning running catch. Gill, who was stationed at midwicket, sprinted 15-20 yards back to catch a misplayed pull by Evin Lewis (10) off Varun Aaron's bowling, leaving the Super Giants at 20/3. Shami continued to deliver unhittable lengths at the other end, dismissing Manish Pandey (6) with a ball that appeared to knock off the top of the off-stump. Hooda and Badoni had to rebuild their innings after a flurry of wickets. They took the Super Giants from 29/4 to 47/4 in 10 overs before unleashing their fury. In the next five overs, the duo smacked 62 runs, including seven boundaries and three sixes, to lift LSG to 109-4 in 15 overs. The LSG shipment was steadied by an 87-run fifth-wicket stand until Rashid Khan, who was smacked for two sixes, trapped Hooda in front of the stumps. Hooda, who hit two sixes and six boundaries in his 55-run knock, failed to sweep a length ball pitched on middle stump. After that, Badoni teamed up with Krunal Pandya to take 15 of Shami's last overs. Off New Zealand pacer Lockie Ferguson, the Delhi hitter smashed a six to mid-wicket to bring up his fifty.  With 25/3 off four overs, Shami was the pick of the Titans' bowling attack.