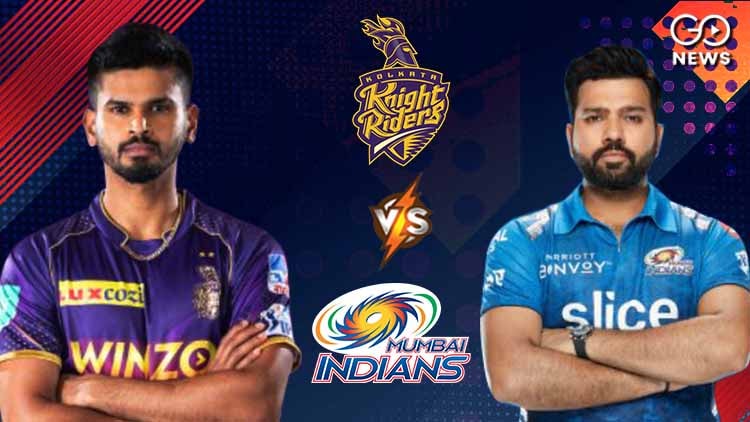 After beating the Mumbai Indians (MI) by 5 wickets at the Maharashtra Cricket Association Stadium in Pune on Wednesday, the Kolkata Knight Riders (KKR) moved to the top of the TATA Indian Premier League (IPL) 2022 table. As KKR chased down the goal of 162 with four overs to spare, Pat Cummins astonished everyone with his batting skills, equaling the joint-fastest half-century in IPL history. Kolkata Knight Riders lost Ajinkya Rahane's wicket early in their chase for 161, as the right-handed batsman was caught in the deep in the fifth over off Tymal Mills' bowling.
Also Read:
IPL 2022: Highlights| Royal Challengers Bangalore(RCB) Defeat Rajasthan Royals By 4 Wicket

On the penultimate ball of the powerplay, KKR lost skipper Shreyas Iyer to Daniel Sams, who took his first wicket of the day, and KKR were 35-2 after six overs. After hitting sixes against Murugan Ashwin and Basil Thampi, Sam Billings, the new batsman in the crease, increased the scoring rate. KKR lost Billings' wicket when the right-hander grounded out to long-off against Murugan Ashwin. Venkatesh Iyer struck his first maximum of the innings. Nitish Rana blasted a six over third base for 14 runs in the 11th over. Murugan Ashwin's second victim was the left-handed batsman, who was caught at deep mid-wicket. Tymal Mills returned to bowl the 14th over and immediately struck, topping Andre Russell, who miscued a pull shot and was caught by Brevis. Pat Cummins, the new batsman, got off to a flying start against Mills with a six and a four. As KKR needed 35 runs from the final five overs, Venkatesh Iyer reached his half-century in the following over, while Cummins hit his second six. With his attacking ability, Pat Cummins reversed the momentum in just one over and went on to score the equal quickest half-century in the IPL. Cummins smashed four sixes and two fours against Daniel Sams to help KKR score 35 runs in the 16th over and chase down the total with four overs to spare. The Mumbai Indians, who were given the opportunity to bat first, made two changes to their lineup: Dewald Brevis and Suryakumar Yadav were picked in the starting eleven. Umesh Yadav kept his strong form going with the new ball, dismissing MI captain Rohit Sharma in the third over, caught by Sam Billings. Dewald Brevis, a MI debut, got off to a strong start, hitting two fours and a six in his first inning, as MI led 35-1 at the end of the powerplay. Brevis was stumped by Sam Billings off Varun Chakaravarthy's bowling after hitting a six. Pat Cummins dismissed Kishan after the left-handed batsman misfired a pull shot that was caught within the circle following a quiet couple of overs. Suryakumar Yadav surged from the 13th over after slamming a four and a top for six against Umesh's bowling. MI were 85-3 with 5 overs to go before giving up 30 runs in the next two overs, with Tilak Varma doing the most of the hitting. Suryakumar Yadav and Tilak Varma put up a fifty-run partnership for the fourth wicket. Suryakumar smashed a massive maximum followed by a four against Narine in the 18th over to put MI in a terrific position with three overs to go. In the penultimate over against Andre Russell, Suryakumar and Varma both smashed fours. Suryakumar was caught behind for 52 runs, but MI closed the innings well as Keiron Pollard's three sixes drove MI to 161/4 in the first innings. Brief Scores: KKR vs MI Kolkata Knight Riders: 162/5  (Pat Cummins 56*, Venkatesh Iyer 50*; Murugan Ashwin 2-25)  Mumbai Indians: 161/4 (Suryakumar Yadav 52, Tilak Varma 38; Pat Cummins 2-49)