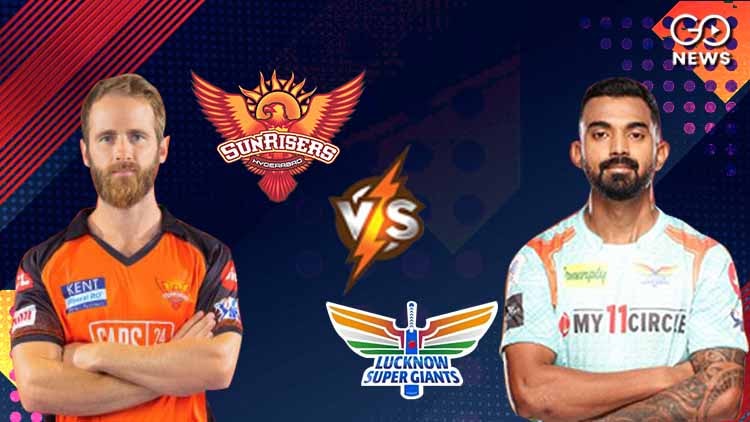 On Monday, the Lucknow Super Giants (LSG) defeated the Sunrisers Hyderabad (SRH) by 12 runs at the DY Patil Stadium in Navi Mumbai, claiming their second consecutive victory in the TATA Indian Premier League (IPL) 2022. KL Rahul and Deepak Hooda both scored fifty runs to help the Lucknow Super Giants to a strong total of 169-7 before Avesh Khan's 4-wicket haul enabled the LSG bowling attack restrict SRH to 157/9. SRH lost captain Kane Williamson early in the innings while chasing 170 runs. The SRH captain was caught at short fine leg by Avesh Khan's bowling in the fourth over after hitting a four and a six each.
Also Read:
IPL 2022: Highlights| Gujarat Titans(GT) Defeat Delhi Capitals By 14 Runs

SRH were 40-2 at the end of the powerplay when Avesh took his second wicket after Manish Pandey caught a flyer to remove Abhishek Sharma. Rahul Tripathi, who was joined by Aiden Markram, smashed three boundaries and got off to a strong start in his innings. Andrew Tye, who had surrendered 15 runs in his second over of the game, bowled the 8th over, which produced three boundaries. SRH were 82/2 at the midway mark when Tripathi raced to 33 off 18 deliveries. Krunal Pandya took his first wicket with the following delivery, dismissing Aiden Markram for 12 after being caught at extra-cover. After Tripathi's crucial innings came to an end when the right-handed batsman was caught in the deep for 44, Pandya added another wicket to his account. Nicholas Pooran's three fours and a six kept SRH's hopes alive, as the left-handed powerful batsman was ably backed by Washington Sundar at the other end. Pooran smashed a maximum with 33 required off the last three deliveries before Avesh Khan struck twice in two deliveries to eliminate Pooran and Abdul Samad. SRH needed 16 runs off the final six deliveries after scoring 10 runs in the previous over. As SRH fell 13 runs short of the mark, Jason Holder bowled the last over to precision, collecting three wickets. LSG had made one change earlier in the day, with Jason Holder replacing Dushmantha Chameera in the playing eleven. With the ball, Sunrisers Hyderabad got off to a good start, taking three wickets in the powerplay. Quinton de Kock and Manish Pandey were stranded within the circle, while Evin Lewis was trapped in front. Washington Sundar took two wickets and Romario Shepherd one. At the conclusion of six overs, LSG were 32-2, with Deepak Hooda joining skipper KL Rahul. After clubbing 20 runs off the Umran Malik over, the two struck a key combination to get LSG out of trouble at 68-3 at the end of 10 overs. LSG bounced back nicely after a shaky start and were in fine form as the fifty combination of Hooda and Rahul ensured the boundaries continued coming. Hooda and skipper Rahul both achieved half-centuries, but SRH were able to break the threatening partnership when Hooda grounded out in the deep off Shepherd's bowling. LSG were 120-4 with four overs to go when Sundar let up 17 runs in the 17th over. While the LSG skipper added a four and a six, the next batsman, Ayush Badoni finished the over with a boundary. Rahul hit a four and a six, but Natarajan's outstanding bowling attack ended Rahul's innings. After a left-handed batsman was cleaned out by a Natarajan yorker, Krunal Pandya became the second player to be bowled. As LSG recorded 169-7 in the first innings, Ayush Badoni performed a crucial closing knock, scoring three fours and 17 runs in the penultimate over. Brief Scores: LSG vs SRH Lucknow Super Giants: 169-7 (KL Rahul 68, Deepak Hooda 51; Washington Sundar 2-28) Sunrisers Hyderabad: 157-9 (Rahul Tripathi 44, Nicholas Pooran 34; Avesh Khan 4-24)