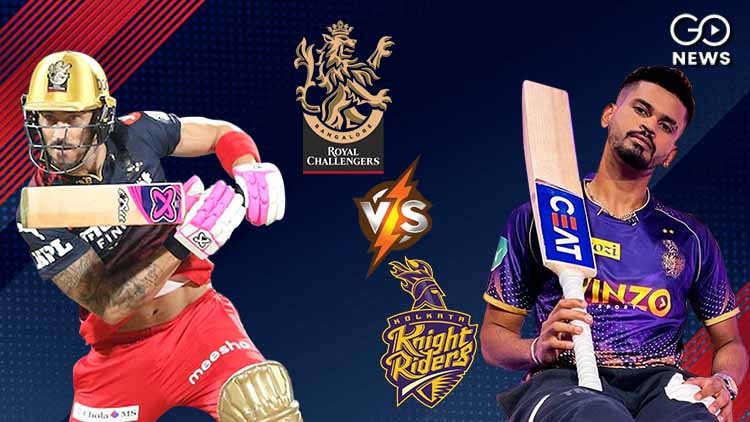 The Royal Challengers Bangalore (RCB) beat the Kolkata Knight Riders (KKR) by three wickets at the DY Patil Stadium in Navi Mumbai on Wednesday, claiming their first victory in the TATA Indian Premier League (IPL) 2022. RCB bowlers, led by Wanindu Hasaranga's four-wicket haul, held KKR to 128 runs before excellent lower-order contributions from RCB players got them over the line in a last-over thriller. RCB did not modify their lineup from the previous game, despite needing 129 runs to win. In the first over of the innings, Umesh Yadav continued his excellent form from the previous game, dismissing Anuj Rawat for a duck. After skipper du Plessis was caught inside the circle, the Royal Challengers lost both of their openers. Virat Kohli, who batted at number three, smashed two magnificent fours but was quickly knocked after being caught behind off Yadav's bowling.
Also Read:
IPL 2022: Highlights| Gujarat Titans(GT) Beats Lucknow Super Giants(LSG) By 5 Wickets

With David Willey and Sherfane Rutherford at the crease, RCB were 3 down for 36 at the end of the powerplay. The batting combination relieved some pressure by attacking spinner Varun Chakaravarthy, who was struck for four and six respectively in the eighth over. The Challengers were 59-3 at the conclusion of ten overs, thanks to some risk-free cricket from Willey and Rutherford, who kept the runs coming. By dismissing Willey for an easy dismissal, Narine drew KKR back into the game. Shahbaz Ahmed, who had been promoted to the top of the order, demonstrated his hitting skills by slamming two sixes against Russell to help RCB regain the upper hand. In the final five overs, RCB needed 36 runs. After Shahbaz hit a maximum against Chakaravarthy, RCB reached 100 runs, but the right-handed batsman was stumped on the following delivery. Tim Southee struck twice in the over to remove Rutherford and Wanindu Hasaranga, with 24 required off the final three overs. In the last over, Harshal Patel smashed two crucial fours before Dinesh Karthik finished the chase with a six and a four. The Knight Riders, who were given the opportunity to bat first, made one change from their previous game: Tim Southee replaced Shivam Mavi in the lineup. With 14 runs in the first three overs, the openers – Venkatesh Iyer and Ajinkya Rahane – made a careful start to the innings. In the fourth over, RCB took advantage of their strong start to dismiss Venkatesh Iyer, who was grabbed and dismissed by Akash Deep. Shreyas Iyer, the KKR captain who joined Rahane, started his bat with two fours. After right-handed batter Rahane was caught in the deep by Shahbaz Ahmed, who took an easy catch, Mohammed Siraj dismissed him. Nitish Rana started his innings with a four and a six off Akash Deep, but the pacer came back to knock the left-handed batsman thanks to a wonderful running catch by David Willey, and KKR were 44-3 after six overs. The Knight Riders' struggles worsened when captain Iyer was caught at long-on by du Plessis off Hasaranga's bowling. The two new batters in the middle were Sam Billings and Sunil Narine. Narine got off to a fast start, smashing a four and a six against Akash Deep. Following Narine, Billings hit a maximum over mid-wicket. Hasaranga took two wickets in a row to send Narine and Sheldon Jackson back to the dressing room. In the ninth over, when Narine was caught within the circle, Jackson was flabbergasted by the spinner. With KKR floundering at 76/6 at the halfway mark, the dangerous Andre Russell went in to bat, and the right-handed batsman declared his arrival with a four and six each. Harshal Patel got in on the action with a rare wicket-maiden over, taking out Sam Billings, who was caught in the deep by Virat Kohli. Russell, on the other hand, showed no signs of backing down, slamming two massive sixes against Shahbaz Ahmed. Russell's spectacular knock of 25 came to an end when he was caught behind off Harshal Patel, who bowled a superb wicket-maiden for the second time in a row. After a mistimed shot was comfortably caught by du Plessis at long-on, Tim Southee became Hasaranga's fourth victim. Before being clean bowled by Akash Deep in the penultimate over, Umesh Yadav and Varun Chakravarthy scored 27 runs for the final wicket. The Knight Riders finished with a total of 128 scores. Brief Scores: KKR vs RCB KKR: 128 all Out after 18.5 overs RCB: 132/7 after 19.2 overs