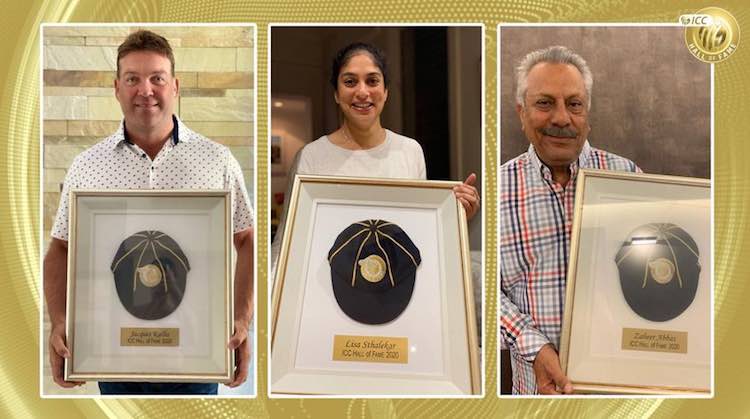 The International Cricket Council (ICC) on Sunday inducted three retired greats of the game into the ICC Cricket Hall of Fame during an absorbing show broadcast around the world via ICC digital channels. South Africa’s gritty all-rounder Jacques Kallis and talented Australian World Cup-winning all-rounder Lisa Sthalekar were joined by Zaheer Abbas of Pakistan, a stylish batsman of the 1970s and 80s who was also known as the Asian Bradman. The show, hosted by commentator Alan Wilkins, featured retired greats Sunil Gavaskar, Melanie Jones and Shaun Pollock as the main guests and had Wasim Akram, Graeme Smith and Alyssa Healy join in to congratulate and appreciate the 2020 inductees.
Also Read:
Amid Fears Of Global Inflation, Indian Investors Are A Worried Lot

Kallis is the fourth South African player inducted and Zaheer the sixth from Pakistan. Lisa is the 27th from Australia and the ninth woman player in the list, which includes five from Australia. In all, 93 players have been inducted so far under the system, which sees retired players become eligible five years after playing their last international match.  Former ICC Cricket Hall of Famers formed the majority of the adjudicating panel with representation from the media, ICC and Federation of International Cricketers’ Association (FICA).  ICC Chief Executive Manu Sawhney: “It is always a pleasure to announce the latest set of inductees into the ICC Cricket Hall of Fame. These are all players with a legacy that will continue to inspire future generations for years to come. I congratulate Zaheer, Jacques and Lisa on their inclusion in the pantheon of cricket greats.”  Jacques Kallis: “It’s a great honour to be inducted into the ICC Cricket Hall of Fame. It is something that I never expected when I started playing. I certainly did not play the game for any accolades or anything like that, I only wanted to win the games for whoever I was playing for.  “But it is nice to be recognised when one has succeeded in the sport, it is nice to be recognised by people for something that you have achieved in the game, something that I am really proud of.”  Lisa Sthalekar: “I am deeply humbled to receive this honour. Never in my wildest dreams did I believe that I would ever get to join such an illustrious group of players.  “I was fortunate enough to learn from the best when I entered the Australia team – Belinda Clark, Karen Rolton and Cathryn Fitzpatrick, all of whom have been inducted into the Hall of Fame, and rightly so. The guidance from them and other teammates along the way kept me focused but also ensured that it was a fun environment. Thanks to all my teammates.  “It goes without saying that if it wasn’t for the support of my family, I wouldn’t have been able to achieve what I have.”  Zaheer Abbas: “I feel privileged and truly humbled to be inducted into the ICC Cricket Hall of Fame of the class of 2020. I am excited to be in the midst of other illustrious cricketers. “I would like to say a special thanks to my family, my country Pakistan, my county Gloucestershire and many fans worldwide who helped me achieve and fulfil my dreams by playing this great game at the highest level. Thank you, ICC, and the members of the jury, for this special honour. It is a final recognition for any cricketer. “This great game has made me the person I am. Thank you cricket.” ICC Media Release