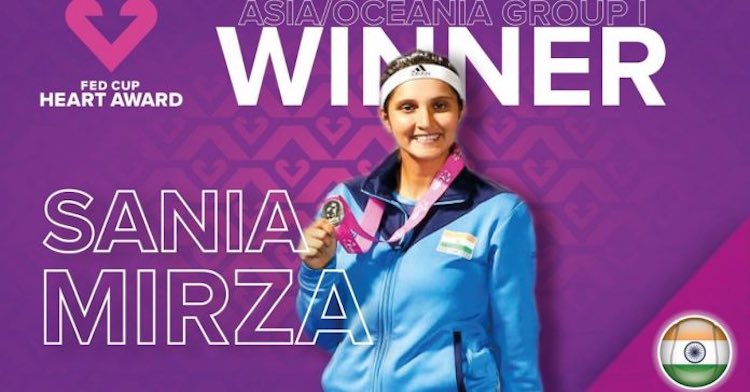 Tennis star Sania Mirza on Monday became the first Indian to win the Fed Cup Heart Award. Sania won the award for Asia/Oceania zone after securing a whopping 10,000 plus votes out of the total 16,985 cast for this year's three regional Group I nominees. Sania Mirza’s vote share of over 60% of the total votes is a testimony to the global popularity of the Indian star at the Fed Cup competition.  The Fed Cup Heart Award winners were determined by online voting by fans which went on for a week starting from 1 May to 8 May, 2020.

"It's an honour to win the Fed Cup Heart Award as the first Indian," said Sania in a statement. "I dedicate this award to the entire country and to all my fans and thank everyone for voting for me. I hope to bring more laurels to the country in the future."

Along with the award, the 33-year-old also received a cheque for $2,000 to be donated to a charity and she opted to help with relief during the ongoing coronavirus crisis.

"I want to donate the money that I get from this award to the Telangana Chief Minister's Relief Fund as the world is going through very difficult times with the virus."

Sania played an integral role in India securing a first-ever place in the Fed Cup playoffs. She won the decisive doubles match that helped India secure their win over Indonesia in their final Group 1 match and they finished second in the group. Also Read: Dalits, Tribals & Muslims Suffer Most By Lockdown