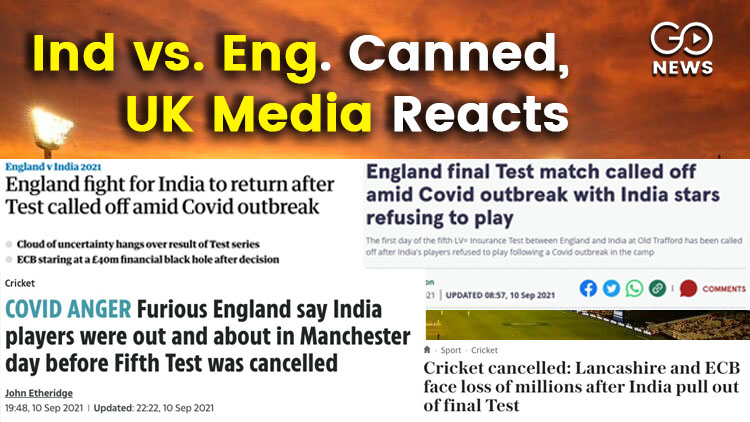 The media coverage in the U.K. about India’s decision not to continue the test series against England has evinced strong reactions in the British press. Here we cover the reactions of the most widely circulated British daily to get a window into how the cancellation of the match is being perceived in the hosts’ countries.
Also Read:
Taliban Upset As 50% Ministers Still On Sanctions List

The ECB has announced that the rescheduled match will be standalone, but the news of the cancellation has been disappointing to fans and players in England. England’s ex-skipper Michael Vaughan said that “India have let English cricket down!!” on Twitter. Media highlighted that the match was sold out, leading to losses not just for fans but for Lancanshire and ECB. The Guardian also pointed out that there has been no comment from Indian players or staff regarding the decision and its fallout.

Yet, The Telegraph also mentioned in its opinion piece that it would be “hypocritical” of England to criticize India on this front, since their own match with South Africa was postponed following a coronavirus outbreak in both camps and their staff. The series was delayed three times in four days before finally calling it off, stating: "mental and physical health and welfare of players from both teams" It is clear that the match was highly anticipated, and it being cancelled with India being in the lead in the series has raised some eyebrows. The Metro’s headline included “India Stars Refuse To Play” and it reported “the marquee cricket series ending in disappointing circumstances.” Similar sharp reactions were evinced in The Sun and The Daily Mail, who termed the development as “Cricket Chaos” and “shock news” respectively. The Independent seemed to take a more measured tone, highlighting the aspect of the pandemic as a factor in the decision, while other outlets claimed Indian players were “out and about” in London at the time they supposedly feared the coronavirus.

Headline in The Mirror The Telegraph called it “completely disrespectful” that the Test was not played, but as noted earlier, wrote that it is not justified to single out India for this decision. The financial loss faced by the ECB, venue, and fans also featured prominently in the criticisms. The Sun has called the home team “furious England” and said that the ECB would have to put up a “£30million-plus fight” to recover costs, including on-site costs and broadcasting rights. It further asserted that the Test would have continued if the IPL (Indian Premier League) wasn’t slated to resume in UAE towards the end of this month.

Headline in The Independent