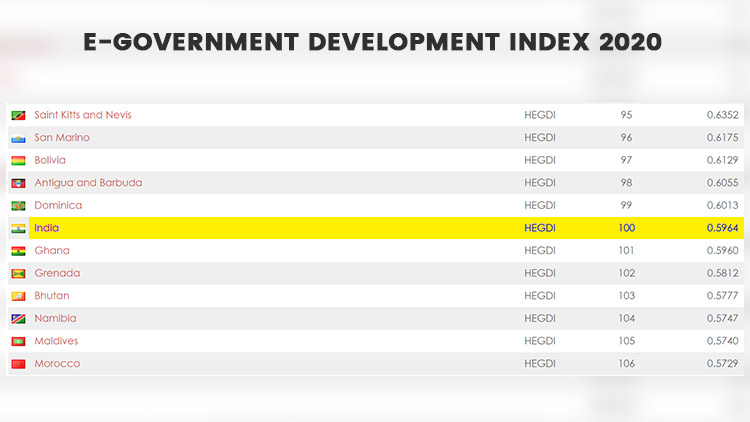 Leading the 2020 ranking of the 193 United Nations Member States — are Denmark, the Republic of Korea and Estonia, followed by Finland, Australia, Sweden, the United Kingdom, New Zealand, the United States, the Netherlands, Singapore, Iceland, Norway and Japan. Among the world’s least developed countries, Bhutan, Bangladesh and Cambodia have become leaders in digital government development, advancing from the middle to the high E-Government Development Index (EGDI) group in 2020.
Also Read:
Centre Tells News Agency PTI To Pay Rs 84 Crore For ‘Breaches’ At Its Delhi Office

In terms of digital Government the survey captures the scope and quality of online services, status of telecommunication infrastructure and existing human capacity. Releasing the survey on Friday, the UN’s Department of Economic and Social Affairs stated that “ as the COVID-19 pandemic forces lockdowns, most countries and municipalities are pursuing digital government strategies — many with innovative initiatives — but vast numbers of people still do not have access to online services”.   The survey covers a two-year period from July 2018 to June 2020. Overall, 65 per cent of Member States are at the high or very high EGDI level. “The pandemic has renewed and anchored the role of digital government — both in its conventional delivery of digital services as well as new innovative efforts in managing the crisis,” said Liu Zhenmin, United Nations Under‑Secretary-General for Economic and Social Affairs. In responding to the current health emergency, Governments have put in place new tools, such as dedicated COVID-19 information portals, hackathons, and e-services for supply of medical goods, virtual medical appointments, self-diagnosis apps and e-permits for curfews. “Many countries were quick to deploy tracking and tracing apps, and apps for working and learning from home. Innovative digital government responses to COVID-19 include online dashboards in Canada and Australia to share information and track emergency responses e-government rankings tend to correlate with the income level of a country, financial resources are not the only critical factor in advancing digital government,” said Zhenmin. “A country’s political will, strategic leadership and commitment to advance digital services can improve its comparative ranking”, he said adding that despite the gains and major investments in e-government by many countries, the digital divide persists.