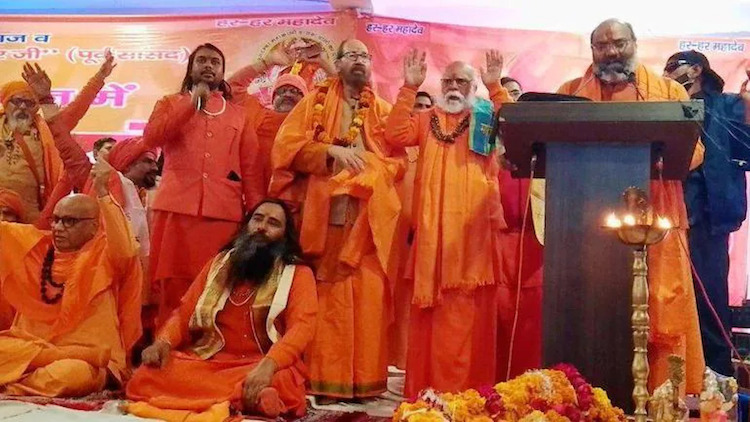 Today on Thursday, leading human-rights organizations Genocide Watch and Amnesty International said that India is on the brink of perpetrating mass violence and a genocide against its Muslim citizens, referring particularly to the ‘Dharma Sansad’ organized in December 2021 in Haridwar, Uttarakhand, where Hindu monks and ‘saints’ gave calls for mass violence against the minority community in a bid to “protect” Hinduism and India.

They were speaking at a Congressional Briefing on 'Hindu Extremists' Calls For Genocide Against Muslims'. 17 international human rights organizations and civil soceity groups including the Indian American Muslim Council  have taken cognizance of the wave of anti-Muslim sentiment, rhetoric, and policies in the Modi regime in India.

Genocide Watch’s president Dr. Gregory Stanton said that the speeches made by Haridwar conclave were “exactly aimed at inciting the genocide of Muslims” and criticized Prime Minister Narendra Modi’s silence on the incident, saying: “As the leader of India, he has an obligation to denounce this genocidal speech… Yet, Narendra Modi has not spoken against it.”

Dr. Stanton said that “genocide is not an event” but rather, a “process”, he highlighted Narendra Modi’s association with anti-Muslim violence in Gujarat in 2002 as well. He said that he and his Bharatiya Janta Party (BJP) “used Islamophobic and anti-Muslim rhetoric to build his political base” and compared the present situation of 200 million Indian Muslims with the Rohingya Muslims in Myanmar.

Amnesty International’s Govind Acharya, who is the organization’s India/Kashmir specialist, called out Uttar Pradesh deputy chief minister Keshav Prasad Maurya for subsequently defending the speeches made at the conclave. He also said: “According to research from the US Holocaust Memorial Museum, India is at high risk – number two in the world – for a genocide… We call on all of you to recognize that the hatred being expressed in India is at a very serious level. We can’t let the Biden Administration repeat the mistakes of the past”

The US Holocaust Memorial Museum’s Early Warning project has placed India and Pakistan as the top two countries with risk of genocide, ascertaining Pakistan’s risk at 15.2% and India’s at 14.4%.