Former billionaire Anil Ambani recently claimed to have zero net worth left in an on-going lawsuit filed by China’s biggest bank in a London Court over Reliance Communication loans. While Anil Ambani's business ventures are crushed by debt, Prem Doshi of Ace Equities analyses exclusively for GoNews how other Reliance’s stocks have fared over the last five years. Anil Ambani has been again in the news for the wrong reasons.
Also Read:
‘Lage Raho Kejriwal’ Says Delhi As AAP Gets Mandate For Another Term

The former billionaire recently claimed to have zero net worth left in an on-going lawsuit filed by China’s biggest bank in London Court over Reliance Communication loans. The situation for ADAG Group (Anil Dhirubhai Ambani Group) shareholders is no different, Here is how the other Reliance’s stocks have shaped up over the last five years. Out of many entities of ADAG Group, currently listed stocks are Reliance Capital, Reliance Infrastructure, Reliance Power, Reliance Communications, Reliance Defence (Reliance Naval), Reliance Home Finance Ltd. 01 – Reliance Capital 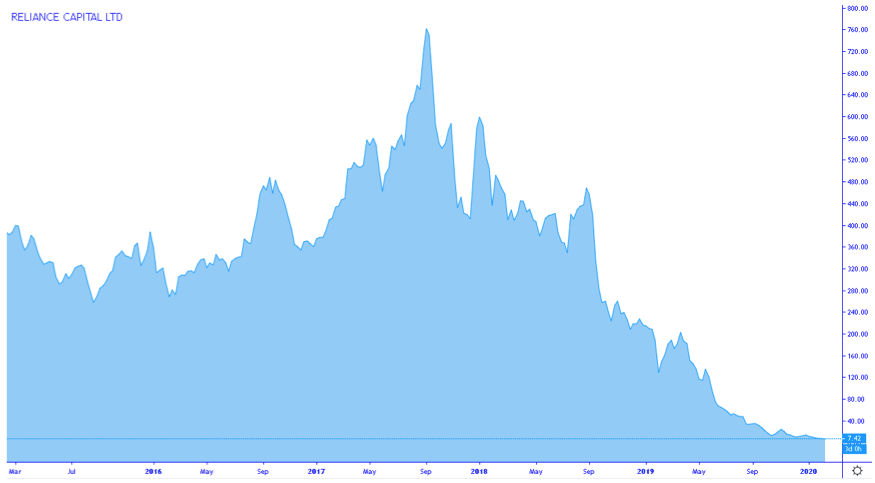 Reliance Capital once used to be a very important stock in the market. Reliance Capital has/had businesses in asset management, mutual funds, life insurance and general insurance, commercial finance, home finance, stockbroking, wealth management services, distribution of financial products, private equity, asset reconstruction, proprietary investments and other activities in financial services. The company was diversified and operated across India and had over 20 million customers and a workforce of approximately 16,000 people at the end of FY 2017. The company had reported a net profit after tax of over 1,000 crores for Financial Year-end 2017. The stock was close to 850 levels back in Sept 2017 and from there now it touched a low of levels close to 7, a massive fall of more than 99%. While even LIC is holding a 3% stake in company the worst losers are small retail investors. If we analyze the Shareholding Pattern filed with exchanges, Small Retail Investors holding share capital less than Rs 2 Lacs had increased over time. At the top, before the fall began, small shareholders holding was at 12.53% at the end of September 2017 Quarter. At the end of December 2018 Quarter after the fall to 200 odd levels, their shareholding jumped to 15.31%. As per the latest quarter at the end of December 2019, small shareholders shareholding has jumped to 37.74% in the company which is more than the Promoter Holding of 33.51%.

Infrastructure is one sector that becomes the sector of the year every year with some or the other big infrastructure story spread out in the market. Reliance Infra primary business is/was power generation, construction, infrastructure projects and defence. The shares of Reliance Infra dived almost 97% from the peak of 600 levels to a share price close to 18. Again small shareholders hold a big chunk of 25.52% in this stock.

Started back in 2002 as Dhirubhai ka Sapna, Reliance Communication has been at the centre of Anil Ambani’s debt problems. Starting off with only CDMA, RCom added GSM offerings too in 2008. It went on to acquire a few companies like MTS with plans to offer Broadband, DTH and lot of other services. The share price of RCOM hovered close to 90 back in January 2016 and from there the stock has crashed to 0.50, Yes just 50 paise now which was the per minute call rate too in India at one point of time. After a fall of more than 99%, Small Retail Shareholders, unfortunately, hold 37.54% stake in the company.

Reliance Power is also known as the IPO that crashed the stock market. The IPO that launched in 2008 coincided with the stock market crash that happened back then. The 11,000 crore IPO got bids exceeding 7 lakh crore. The IPO was oversubscribed by more than 72 times at the IPO price of Rupees 430-450. Listing was dismal and so was the performance ever since. The power company stock was trading at levels close to 60 as recently as January 2018 and from there it has now crashed to a level of almost 1.50. A fall of about 98% with high small shareholder holding of about 20%. 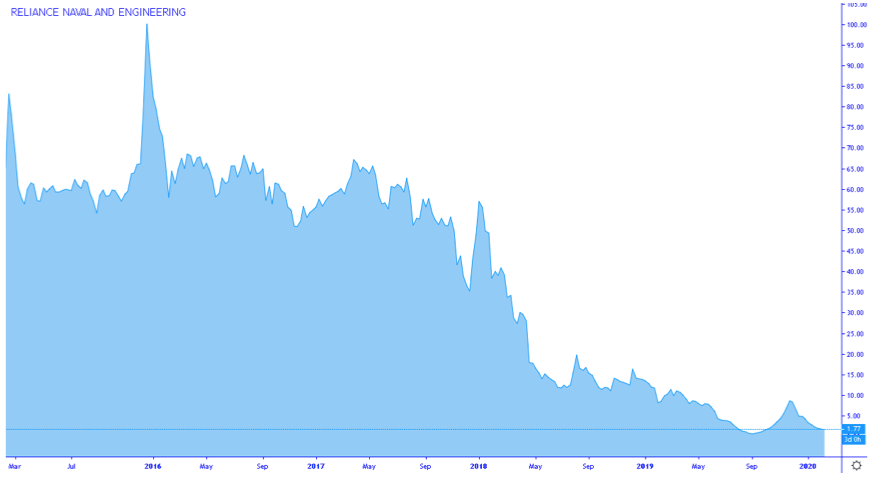 Reliance Naval and Engineering Company was formerly known as Reliance Defence & Engineering Ltd. The shipbuilding, defence and heavy engineering company was formerly a Pipavav Group company that was acquired by Anil Dhirubhai Ambani Group. In a defence stock boom in early 2016, Rnaval went up to levels close to 100 and from there it has now come crashing down to 1.50. A massive correction of more than 98%. 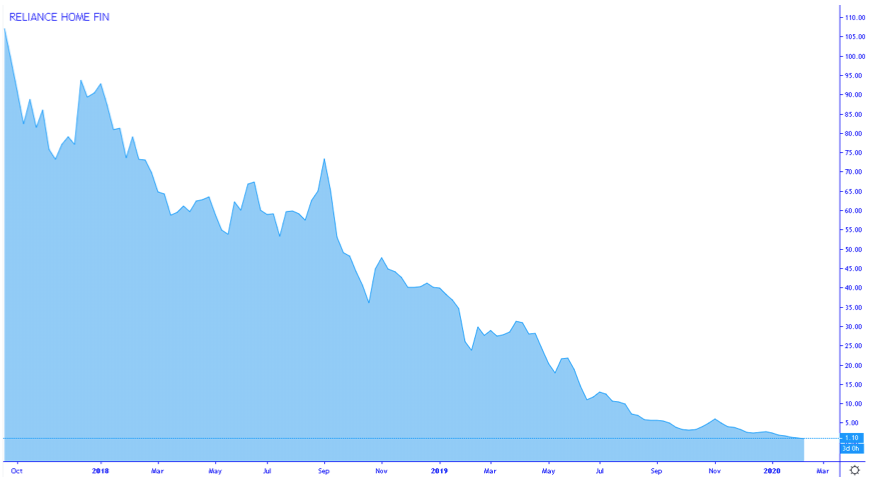 Reliance Home Finance was the newest listing of ADAG Group, listed as a Demerged Entity from Reliance Capital in 2017. The stock got listed close to 110 and failed to see that level again. Currently, the stock trades at distressed levels of 1.10, a fall of 99%. That’s all on the ADAG Group, for Investors this is a clear cut lesson to avoid Debt-Ridden companies or companies that belong to Debt-Ridden Groups.