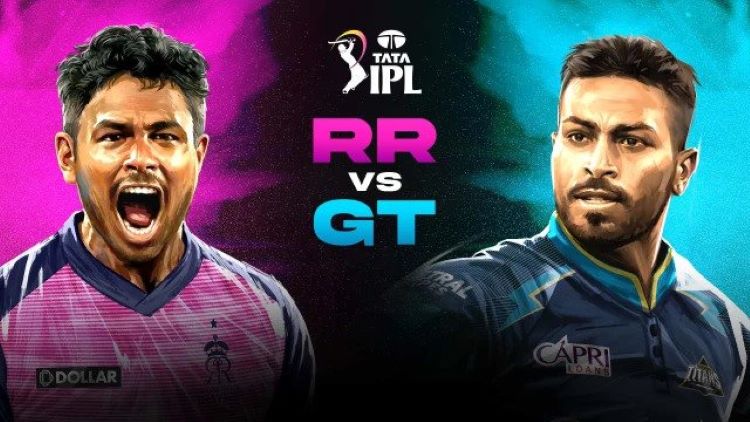 The Gujarat Titans (GT) topped the TATA Indian Premier League (IPL) 2022 standings after defeating the Rajasthan Royals (RR) by 37 runs at the DY Patil Stadium in Navi Mumbai on Thursday. Hardik Pandya shone in all three areas as the Gujarat Titans captain guided his squad to a 37-run triumph at the top of the table. With 193 runs to chase, Jos Buttler had an immediate impact, scoring five fours and a six in the opening two overs.
Also Read:
IPL 2022: Highlights| Sunrisers Hyderabad(SRH) Defeat Gujarat Titans(GT) By 8 Wickets

Yash Dayal took his first IPL wicket when Devdutt Padikkal was caught at first slip on the first delivery he faced. Buttler, on the other hand, kept the boundaries coming after hitting three fours and a six against Dayal in the third over. R Ashwin, who had been elevated to the top of the order, launched a 6 home run before being caught by Miller, who made a quick grab inside the circle. With a six off 23 deliveries, Buttler achieved his half-century, but a slower yorker from Lockie Ferguson outed the right-handed batter's stumps. Sanju Samson, the RR captain, smashed his first 6 of the innings in the seventh over, but his stay at the crease was cut short by a fast throw from Hardik Pandya. The second batsman to be removed was Rassie van der Dussen, who was caught behind for six runs by Dayal's bowling. With Shimron Hetmyer and Riyan Parag at the crease, the equation was down to 91 off the last eight overs for RR. Hetmyer hit a fours and a six against Shami, but the speedster took advantage of Hetmyer's misplayed delivery and was caught in the deep in the same over. Riyan Parag hit the opening delivery of the 16th over for six, but was caught in the deep later by Ferguson's bowling, and RR needed 55 runs from 24 deliveries. The GT skipper delivered the 18th over and dismissed Neesham with a catch off his own bowling. In the last over, RR needed 40 runs. As RR fell 38 runs short of the score, Dayal took his third wicket of the innings. The Gujarat Titans, who were given the opportunity to bat first, made two changes to their lineup: Vijay Shankar and Yash Dayal were picked in the starting eleven. In his first over against Mathew Wade, James Neesham, who replaced the injured Boult, let up three fours. With a direct hit, Rassie van der Dussen delivered a run-out to finish Wade's innings. In the third over, Kuldeep Sen caught Vijay Shankar's outside edge and dismissed him for two runs. Hardik Pandya, the captain, counter-attacked by hitting three consecutive fours against Kuldeep. At the end of powerplay, GT was 42/2. In the following over, Riyan Parag gave up a six and a four, but he was able to remove Shubman Gill when the right-handed batsman blasted out to long-on. GT were 87/3 at the conclusion of 12 overs, thanks to skipper Hardik Pandya and Abhinav Manohar, who kept the runs coming. In the 13th over, Abhinav Manohar smashed a four and a six against Chahal. With three fours in the next over, Hardik kept the momentum into the next over and completed his half-century. Pandya hit back-to-back sixes against Ashwin in the 15th over, resulting in 16 runs. After Abhinav was caught for 43 by Ashwin, Chahal brought the partnership to an end. In the last over, David Miller put the finishing touches on the innings, hitting five fours and one six for a total of 21 runs. Hardik remained unbeaten on 87 after the GT skipper smashed a four and a six in the first innings, helping the team to a total of 192/4. Brief Scores: GT Beat RR Gujarat Titans: 192/4 (Hardik Pandya 87*, Abhinav Manohar 43; Yuzvendra Chahal 1-32)  Rajasthan Royals: 155/9 (Jos Buttler 54, Shimron Hetmyer 29; Lockie Ferguson 3-23)