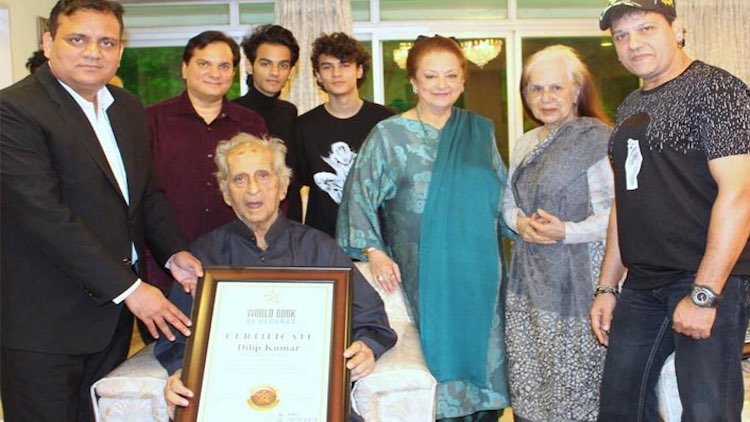 The popularity and success of 97-year-old thespian Dilip Kumar -- famous as ‘tragedy king’ in the world of cinema -- have not diminished with the passage of time, with new achievements still being added to his name.  Now, a London-based institution has included his name in the World Book of Records, thus conferring another honour on him. Due to ill-health, Dilip Kumar could not go to London to accept this award. His wife Saira Bano and other members of his family expressed their joy at this development and accepted the citation from the institution.
Also Read:
CAA Spooks India's Neighbourhood

Dilip Kumar has delivered some remarkable films in his 50-year career in Hindi cinema, which is why his name has been included in the World Book of Records. This London-based institution prepares a catalogue of famous personalities in various fields from around the world. Bollywood actor and politician Shatrughan Sinha has congratulated Dilip Kumar on receiving this award. He tweeted, “Many Congratulations! To the great thespian & greatest actor par excellence #DilipKumar on being honoured by the ‘World Book of Records’ London. This should have come much earlier but nonetheless it is highly appreciated and applauded.” Dilip Kumar started his film career in 1944 with the film ‘Jwaar Bhata’. After this, he worked in several successful films like ‘Naya Daur’, ‘Yehudi’, ‘Paigham’, ‘Ram Aur Shyam’, ‘Kranti’ and ‘Saudagar’. Apart from this, Dilip Kumar’s roles in films like ‘Devdas’ and ‘Mughal-e-Azam’, which are among the most memorable films in the history of Hindi cinema, saw him reach new heights of success. In view of his contribution to cinema, the government of India has conferred the Padma Bhushan and Padma Vibhushan awards on him.

Legendary actor @TheDilipKumar, who turned 97 this December, has been honoured by the World Book of #Records for his matchless contribution to #Hindi cinema@lalitakashyap13