By Athar Parvaiz/thethirdpole.net The central government has identified 15,000 acres in Kashmir – mostly next to rivers, streams and wetlands – for investors from outside the region Also Read: Rang De Basanti Cast Adds Voice To Anti-CAA Protests

Following New Delhi’s decision to scrap the semi-autonomous status of Jammu and Kashmir on August 5, 2019 and its subsequent conversion into a union territory, the J&K administration has stepped up efforts to create “land banks” for investors from outside Kashmir Valley. Over 7% of government-owned land in the valley has already been identified for this purpose: 15,000 acres out of 203,020. Most of the plots identified are in the floodplains of or adjacent to rivers, streams and wetlands. Information on the availability of government-owned land in the 10 districts of the Kashmir Valley has been compiled in recent months. They show a total of 1,624,162 Kanals (203,020 acres). The Kanal is a local unit of land area. Not all of this is fit for development or for supporting infrastructure. Speaking on the condition of anonymity, a senior official in the J&K revenue department told thethirdpole.net that the process of identifying the land that can be developed is ongoing, and over 120,000 Kanals (15,000 acres) have been identified as fit for infrastructure development. “Our government is identifying large patches of land for inviting investors to set up industries in Jammu and Kashmir,” the official said. Most of the government-owned land that has been identified lies adjacent to rivers, streams and wetlands, the official said. “In the coming weeks, more land will be identified. A lot of developable land has been encroached upon by people.” 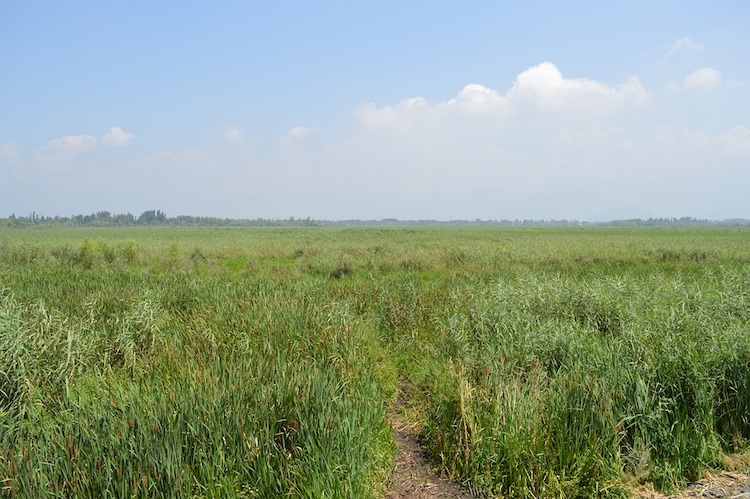 The Narkara wetland near Srinagar [image by: Athar Parvaiz] In Kupwara district, around 45,000 Kanals out of 1,36,357 (5,625 acres out of 17,004) of government-owned land has been encroached upon, he added. “In all the districts, parts of government land has been encroached upon and the option of taking the encroached land back from encroachers is also being explored. The government is seriously pursuing the creation of land-banks. This can be gauged from the fact that five meetings, wherein top-level officials participated, were held in the past seven days only.” According to him, the government is looking for chunks of developable land owned by it in various districts with plots ranging from at least two acres to over 11 acres. Land is quite scarce in Kashmir, especially in Srinagar and other towns. This reporter saw a recent government land-transfer order of three acres from the agricultural department, for the purpose of infrastructure development. On this plot, the agricultural department had just finished spending INR 6,000,000 (USD 85,714) on construction of five high-tech greenhouses for the Regional Science Centre.  The official documents seen by this reporter said that on an average, the department would sell over a million (mostly hybrid) seedlings annually from this plot to vegetable farmers of Srinagar and adjacent districts. The installation of five high-tech greenhouses would hugely improve both quality and quantity of the seedlings, an expert in the department said. Click here for full story
TAGS Investors Farmers Jammu and Kashmir Sonmarg Srinagar Article 370 Land Environment Kashmir