Rescued 'Nepali' Bear Denied Exit To India Over Its 'Nationality' 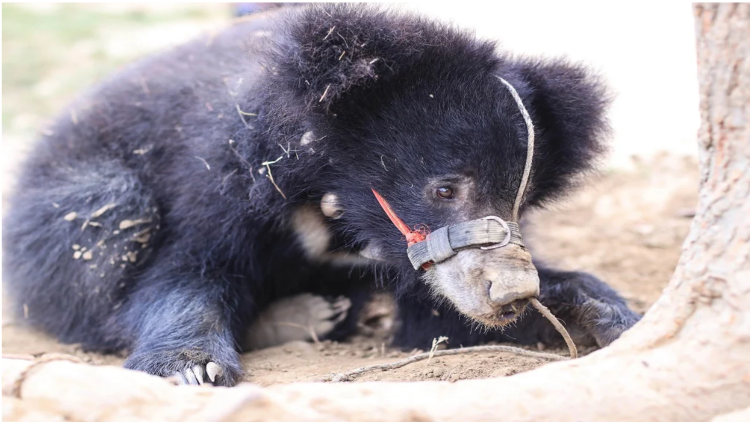 By Diwakar Pyakurel/thethirdpole.net It all started with a front page story in Kantipur, a popular Nepali daily. The piece followed the life of a bear tamer in Siraha, who made a living by making a little bear dance for an audience as he wandered around the southeastern district each day. The reporter’s tone was sympathetic to the man and his poor living conditions, and the piece touched many of the paper’s readers. Also Read: China Revises Data, Raises Wuhan’s COVID-19 Death Toll By 50 Percent

For Sneha Shreshta, however, nothing could be more infuriating. “The first thing I wanted to do after reading the story was go with my team to Siraha to rescue the animal and free it from torture,” said Shreshta, who runs an animal welfare charity. Her team travelled overnight from Kathmandu to rescue little Dhutharu, the one-year-old male sloth bear in a village near the district headquarters Lahan.

Named after sloths for their lethargy, sloth bears (Melursus ursinus) like Dhutharu are found in Bangladesh, India, Nepal and Sri Lanka, according to the Convention on International Trade in Endangered Species of Wild Fauna and Flora (CITES) Secretariat. They are also listed as vulnerable on the IUCN Red List. Since NGOs like Sneha’s Care are not authorised to rescue wild animals themselves, Dhutharu was handed over to the government, with a request that he be transported to a wildlife recovery centre in India as Nepal does not have such a facility. But, six months on, he is languishing inside a small cage in the country’s only zoo in Kathmandu. Government officials have dismissed repeated calls by Shrestha and other activists who urge that the bear be sent to India, on the pretext that the animal is Nepali property. The activists argue that the government should not make an issue of the ‘nationality’ of an animal, primarily one that is wild by nature, when deciding where the animal should live. Does wildlife have a ‘nationality’? The debate surrounding Dhutharu’s fate exposes the government’s poor preparedness to deal with transboundary wildlife conservation, which has become a recurring issue for Nepali authorities. The case follows the controversy during the transfer of Rangila, said to be ‘the last’ of Nepal’s dancing bears, to India in 2018. Shrestha had hoped that the government would easily hand Dhutharu over to a wildlife sanctuary in India as Nepal had already sent two rescued ‘dancing bears’ to India in the last decade: the first in 2010 and the second in 2018.

Other animal rights activists agree with her. “We already have two precedents, hence sending the bear to India should not be an issue,” said Niraj Gautam, who was involved in the two earlier cases. “But this case is different,” Gopal Prakash Bhattarai, the chief of the Department of National Parks and Wildlife Conservation, told thethirdpole.net. “In the Rangila case (2018), the rescuers had documents that showed the bear came to the Nepali side from India. [In Dhutharu’s case] they do not have any such evidence. Hence, we do not entertain requests for repatriation.” Gautam, who worked for the Jane Goodall Institute until a few months back, and led the rescue and repatriation of Rangila, recalled that repatriating the bear was not as easy as Bhattarai is now making it sound. Even then the department was not ready to listen to activists, and left them no choice but to reach out to the political leadership. “The decision to send Rangila was made during a cabinet meeting,” Gautam said, adding that activists had shared some ‘soft’ evidence at the time. “We told them that the communities making bears dance are scarce in Nepal; even if a Nepali still does it, it is under the influence of the Indians; and mostly, such animals are rescued near the open border, so the animal must have belonged to India.” Gautam explained that the tradition of dancing bears is unheard of in the hills and mountains of Nepal, and exists only in the southern plains that border India. InIndia, the practice is now illegal, and is dying out. The rarity of the practice drives media coverage, and these are always called ‘the last dancing bear’. Raju, rescued in Bangalore in 2009, and Rangila rescued nine years later in Nepal, were given similar titles. In Dhutharu’s case, the tamer has told the Kantipur reporter that the bear is the last remaining member of a bear couple gifted to his grandmother from her Indian parents as part of dowry. Dhutharu is likely the third or fourth generation of the bear couple’s family. For full story, go to thethirdpole.net
TAGS India Environment dancing bear Kathmandu Wild Animals rescued bear bear Wildlife nationality Nepali bear