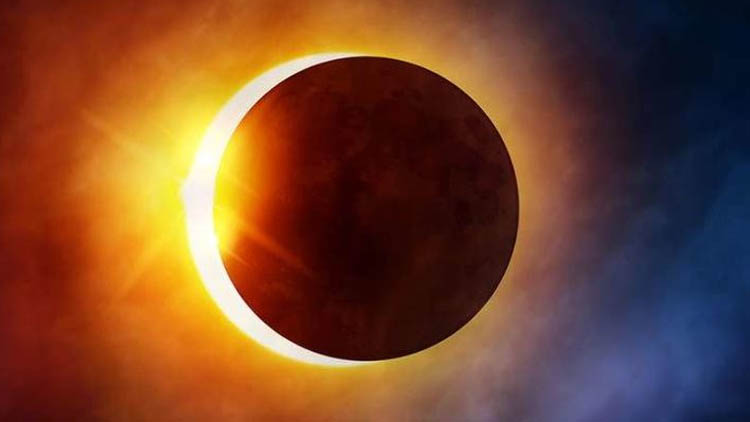 This is the first time in 38 years that an annular solar eclipse is occurring on the same day as the summer solstice. And the next time this will happen in this century will be on June 21, 2039. Excitement mounts as large parts of North India will on Sunday witness the rare annular solstice solar eclipse along with certain parts of the west and east in the country. Other areas in India will see only a partial eclipse.
Also Read:
A Record 183,000 New Coronavirus Cases Reported To WHO In Single Day

Bhuj will be the first in India from where the start of the eclipse will be visible at 9.58 am and it will end at 2.29 pm in Dibrugarh, Assam, according to the Nehru Planetarium. However, given the cloudy conditions as monsoon clouds gather over the country, millions are hoping they will get  to clearly see and experience the rare celestial event. When an annular (derived from Latin for ‘ring’) solar eclipse happens, the moon comes between the earth and the sun, but due to the alignment and distances between the three bodies, the moon covers only the centre of our great star, leaving the fiery outer edges visible and therefore creating the ‘ring of fire’ effect. Interestingly, a research and resource provider based out of Norway, Time and Date AS, states that in India “At the location of Greatest Eclipse, near the border of China and Nepal, the width of the path is about 21 kms and the annularity here lasts for around 38 seconds”. (It would seem this area which is witnessing rising tensions these past few days is also on the celestial radar).

There are precautions advised for a solar eclipse of any kind. Definitely do not look with the naked eye or with ordinary sunglasses. Experts say using welding goggles with sufficient shading is the safer option. The summer solstice is quite simply the longest day in the year, when maximum daylight occurs and is usually on June 20 or 21 in the Northern Hemisphere. It’s a day when the sun is at its highest point in the sky. It is celebrated in many cultures as a mark of and honour to the earth’s ‘fertility’.