Justice Bobde's tenure was marked with some landmark judgements though his actions at times were termed controversial. 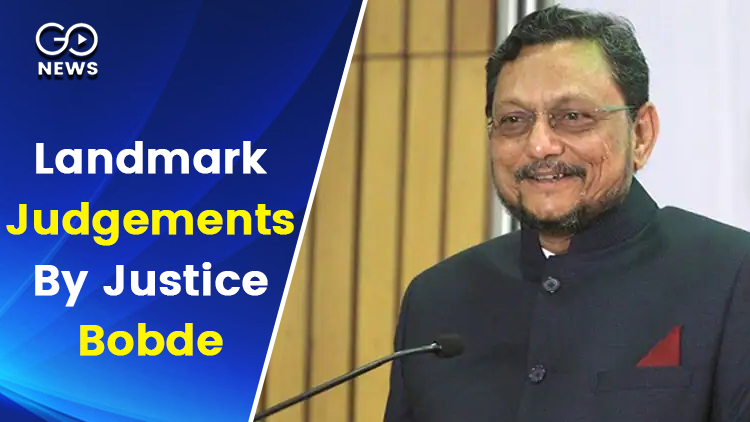 Main Judgements / cases presided over / Cases in SC during tenure as CJI 1.    Supreme Court Moves online: Under CJI SA Bobde due to pandemic, e-filing module for the Supreme Court was launched in May 2020 and made the filing of cases completely electronic. Cases were then taken online
Also Read:
Rob Van Kranenburg: A Morality of Movement, as the center will not hold

2.    Migrants Crisis: Pandemic and lockdown forced millions of migrant workers to walk back to their homes in rural areas.  Several petitons before court sought intervention,  however, the court accepted the government’s submission that no migrant were on the roads and they were all being fed, the court accepted this and refused to pass any order on the issue. Finally after several former judges and lawyers wrote to the court , the court passed directions to provide free food and transport to the migrants 3.    Farm Laws: CJI led bench stayed the implementation of the 3 controversial farm laws in January. CJI led bench ordered formation of a 3 member committee to talk to the farmers and govt and find an end to the deadlock 4.    In House committee looking into chares of Sexual harassment by former CJI Ranjan Gogoi: In house committee headed by SA Bobde, and included, Justice N V Ramana and Justice Indira Banerjee. Committee comcluded that there was no substance in the allegations and gave a clean chit to the former CJI 5.    Clean Chit to Justice N V Ramana on allegations raised by Andhra Chief Minister Jagan Mohan Redd. In March Supreme court website mentioned that the complaint sent by the Andhra CM had been dealt by the In-House Court procedure and stood dismissed. No details of the procedure was shared. 6.    Rohingyas : Bench comprising CJI SA Bobde , Justice AS Bopanna and Justice V Ramasubramanian passed an order turning down the release of 150 detailed Rohingyas in Jammu and allowed for their deportation to Myanmar. When petitioners mentioned that they face slaughter, the court orally observed, ‘Possibly that is the fear that if they (ROHINGYAS) go back to Myanmar they will be slaughtered. But we cannot control all that.” 7.    Environment : CJI Bobde has been vocal about need to protect the environment. In a case involving the cutting of trees in West Bengal for a railway expansion project, CJI had set up a committee to examine the ‘Rationalised value of a tree’ so as to arrive at the real cost enefit analysis of projects which required cutting of trees. A committee set up in the case pegged the value of a tree with a life span of 100 years to be 72 lakh rupees. CJI had observed in the case ‘it is believable, very believable. Before anybody knows, everything will be lost. People are not willing to explore alternatives. There could be a way to create a path without cutting trees though it might be a little more expensive."