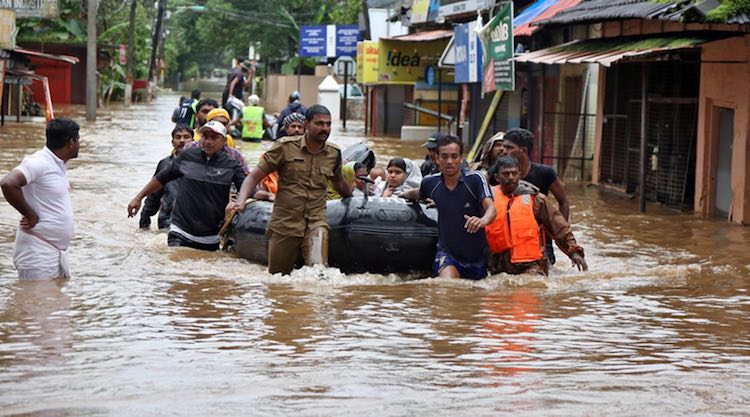 After heavy rain, floods and landslides in the northeastern states of the country, the devastation is shifting towards the southern states. At least five people died due to landslides while 10 people have been evacuated safely after heavy rains in Kerala’s Idukki district. The accident occurred near a tea garden in the Rajmala area of ​​Idukki district. It is believed that the victims and affected families used to work in tea gardens.

State Chief Minister Pinarayi Vijayan has sought the help of Air Force helicopters to carry out relief and rescue operations. Teams of Police, Fire, Forest and Revenue Department have been asked to intensify relief operations.

The situation has worsened in Rahul Gandhi’s parliamentary constituency Wayanad. There are flood-like conditions here due to the continuous rain for three days. Water has inundated the low lying areas of the district where a significant portion of the population lives. The Indian Meteorological Department has expressed the possibility of heavy rain in Wayanad on Friday and Saturday. Wayanad’s District Collector Dr. Adeela Abdullah informed that at least 560 people have been kept in 12 relief camps.

The situation is worsening in the Mallapuram district in the state where waterlogging has taken place on the roads. Pictures of the Neelambur area of ​​Malappuram are surfacing where water is flooding from all sides.

According to the Mallapuram Disaster Management Authority, seven camps have opened in Nilambur and nine in Malappuram. There are at least 425 people in various camps in Malappuram and a total of 410 people in seven camps in Nilambur. Shiva temple in Aluva has been submerged in water due to rising water levels in the Periyar river after incessant rain. The Weather Department has issued heavy rain alert till August 9 in nine districts including Ernakulam, Idukki, Thrissur, Palakkad, Kozhikode, Wayanad, Kannur, Mallapuram and Kasaragod.

Apart from Kerala, there is a possibility of heavy rains in the coastal areas of Karnataka from August 7 to 10. There may be torrential rains in Northern Kannada, Southern Kannada for the next three days, while flood-like conditions have arisen in Kodagu district after heavy rain. A red alert has been sounded in many areas of Karnataka. The movement of vehicles stopped at Algeshwara Road in Koppa town in Chikmagalur district due to overnight rains.

In view of the flood-like situation in many parts of the state, Chief Minister BS Yeddyurappa has ordered the immediate release of Rs 50 crore for emergency relief. The biggest danger of flooding is hovering in the coastal areas of the state.