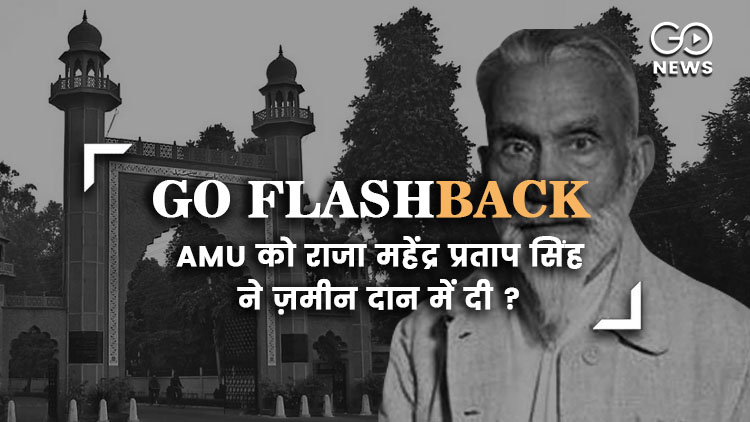 Prime Minister Narendra Modi went to Aligarh today to lay the foundation stone of a university named after a Jat king, Mahendra Pratap Singh. In Aligarh, Modi held a public meeting in which he said that this university would be constructed across an area of 100 acres. Chief Minister Yogi Adityanath and Governor Anadiben Patel were also present at this event. Here, the Prime Minister claimed that Raja Mahendra Pratap Singh had donated a big area of land to the Aligarh Muslim University (AMU), although he did not specify on which basis the land had been granted. This half-truth on part of PM is bound to set off a new round of fierce debate on social media. Recently, there were many similar claims being made on social media that Mahendra Pratap Singh donated land to AMU.
Also Read:
Indians Willing To Spend During Festive Season

Land To AMU Was Bought From The British Raj Historians say that Raja Mahendra Pratap Singh did not, in fact, grant land to the AMU, but rather, the varsity’s founder Sir Syed Ahmed Khan approached the British government for buying the land that went towards a major portion of the campus’ area. The Mohammedan Anglo Oriental (AMO) College, Aligarh was founded on 8th January, 1877. If historians are to be believed then the majority of the land of the University was bought from the British who were closing down the Aligarh Cantonment at that time. Sir Khan obtained 74 acres of land in this way. Muslim Mirror, an online media platform interviewed prominent historian Dr. Rahat Abrar in which he refuted this claim of land being donated to AMU by Raja Mahendra Pratap Singh. Similarly, in an interview to the English daily The Pioneer, famed historian and professor Irfan Habib said that despite being a close friend, he was never told by Mahendra Pratap that the latter donated any land to the Aligarh Muslim University. This matter is between the buyer and the seller, he said. Raja Mahendra Pratap Is An AMU Alumnus According to The Pioneer, the nonagenarian (90-year old) professor Irfan Habib says he helped the Raja contest the parliamentary elections. He and his father had good relations with the Raja sahib, and yet he (Raja Mahendra) never said anything about giving land for a university. Historians tell us that Raja Mahendra Pratap Singh was an alumnus of the Anglo Oriental College (now Aligarh Muslim University) Referring to the land debate, Dr. Rahat Abrar says that “Mahedra Pratap’s father hd good relations with Raja Ghanshyam Singh of Mursan and his grandfather Raja Tikam Singh were good friends of Sir Syed Ahmad Khan. Dr. Abrar says that after the death of his father, Mahendra Pratap entered the AMU where he was specially allotted two rooms in which he could stay with his bodyguards and study. However, he left the university without completing his graduation. Raja Tikam Ram Singh gave ₹800 toward Sir Ahmad Khan’s Scientific Society and Raja Ghanshyam Singh donated ₹1500 for construction of the AMO’s first hostel which still exists in the Sir Syed Ahmad Khan Hall compound, says Dr. Abrar. further mentioned that Raja Mahendra Pratap gave 1.2 hectacres of land towards the AMO College School on a token lease of ₹2 per month. He says that Mahendra Pratap was a capable ruler who donated generously to the establishment of many schools and colleges in the region. 3 Acre Land Was Leased For 90 Years The English daily The Hindu reports AMU spokesperson saying that “The Raja gave 1.2 hectares (3.04 acres) of land to the university in 1929 on lease for 90 years which expired in 2019 and talks have been ongoing with Mahendra Pratap Singh’s family since then.” He said that the land had been divided into two parts: the AMU city high school runs on one side and the other is taken up by a triangular park. According to Prof. Irfan Habib, who as mentioned above was close to Raja Mahendra Pratap, said that the raja left for Kabul in 1914 during World War I and returned to India some time before Independence in 1946. Thus, Raja Mahendra Pratap spent a good part of his life outside the country. He is most remembered for forming the provisional Indian government in Afghanistan in 1915. Yogi’s Promise To Build University Named After Raja Mahendra Pratap In the 1957 Lok Sabha elections, Mahendra Pratap defeated Bhartiya Jan Sangh’s Atal Bihari Vajpayee as an independent from the Mathura seat. In 209, while addressing an election rally in Iglas, Uttar Pradesh, CM Yogi Adityanath promised to build a university named after him in the region whose foundation stone has been laid today by the Prime Minister. A press release issued by the PMO states that the university will be built in Aligarh’s Kol tehsil’s Lodha and Musepur Karim Jarauli villages over a 92-acre area. This university will accredit 395 colleges of the Aligarh division.