No Prime Minister: Why India Has a' Rights-Based' Developmental Model; Not Duty Based 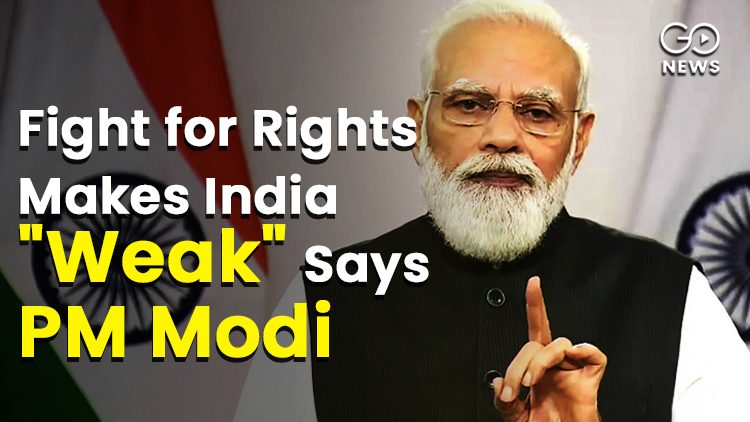 Prime Minister Narendra Modi has sparked off a new controversy by stating that Indians have been wasting their time during the last 75 years by talking and “fighting about their rights” and instead every citizen should “light a lamp of duty” to take the country forward. His statement came while he was addressing the Brahma Kumaris celebrating “Azadi Ka Amrit Mahotsav” through video conferencing on Thursday.  He said: “In the Last 75 years, we only kept talking about rights, fighting for rights and wasting our time… The talk of rights, to some extent, for the time, maybe right in particular circumstances but forgetting ones duties completely has played a huge role in keeping India weak… All of us have to light a lamp in the heart of every citizen of the country- the lamp of duty.”
Also Read:
Budget 2022 Countdown: Economic Survey 2021 Way Off GDP Numbers

His observation that the citizens should give precedence to their duties rather than fighting for rights, runs into the teeth of not only the basic premise of the modern governance but also India’s Constitution and its commitment to the UN Charter of Human Rights. Many of the current legally bound rights available to Indians – Right to Information, Right to Education, Right to Livelihood and the Right to Food – have their origin in India’s belief in global Human Rights.  Experts say that the rights-based approach may be defined as an empowering approach that stems from the Universal Declaration of Human Rights, which suggests that citizens have justifiable entitlement, with human dignity and worth, to basic services – for example, food, education, health, and employment, and justifiable duties to the community – and nation-states have an obligation to meet those entitlements, and citizens have obligation to meet duties such as paying their taxes and flowing the rule of law.  The adoption of such a rights-based approach has its roots in the Indian Constitution. Article 21 of the constitution states that ‘‘No person shall be deprived of his life or personal liberty except according to procedure established by law’’. The Supreme Court of India interpreted this provision and stated that:
“Right to life . . . includes the right to live with human dignity; it would include all these aspects which would make life meaningful, complete and living...income is the foundation of the many fundamental rights and when work is the sole source of income, the right to work becomes as much fundamental.”  In another instance the Supreme Court of India included the right to work as one of the positive rights guaranteed under Article 21. In addition, one of the directive principles (not enforceable in the court of law) stated in the constitution directs the state as follows:  “Within the limits of its economic capacity and development, make effective provision for securing the right to work, to education and to public assistance in cases of unemployment, old age, sickness and disablement, and in other cases of undeserved want.”
Article 39A refers to ‘‘right to an adequate means of livelihood’’. All these provisions echo well with universal human rights. India is a signatory to the UN Charter of Human Rights and the rights-based entitlements emanate from this commitment as also articulated by UNDP’s Social Development Goals or SDGs, where India has shown a remarkable improvement since the turn of the century.  In his 2011 address from the ramparts of the Red Fort on the Independence day, former Prime Minister Manmohan Singh articulated the four rights his government had supported by legislative action. (embed video here). He said that the basic rights entitlement of the citizens had helped in India’s growth and its standing in the world.
Now, Mr Modi’s observation on the basics of this developmental model is also witnessed in the conduct of his government.  India fought for its independence under a slogan “Freedom is my Birthright”. Without citizens fighting for their rights, no people can prosper and no nation building can take place. The state is meant for the welfare of the people. A Prime Minister should not invoke duties of the citizens to counter that.