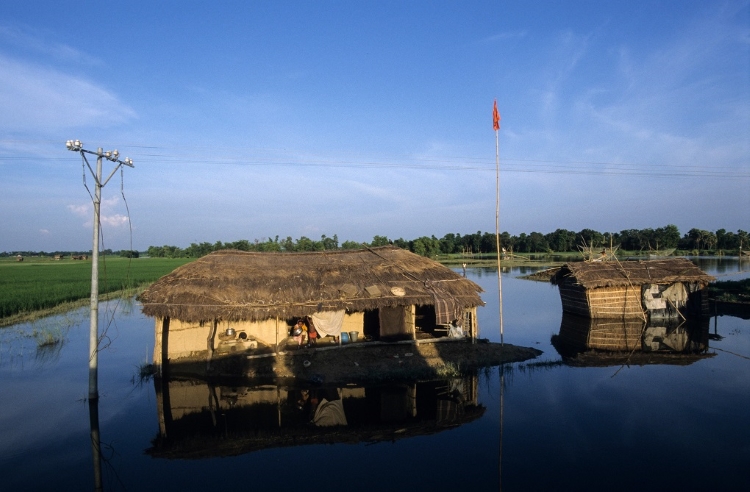 By - Mohd Imran Khan/thethirdpole.net As rivers rise in the Indian state, complications with upstream Nepal, the effects of the pandemic and lockdown combine to worsen the situation for citizens Also Read: Uttarakhand: Three Dead As Building Collapses In Dehradun After Incessant Rain

On July 11, Reshmi Devi was forced to leave her village, which is within the embankments of the Koshi river in Supaul district, Bihar. Floods have been a routine threat to Devi, a widow, and many others in the east Indian state of Bihar, for the past few decades. Since the weekend hundreds of people have fled, or are fleeing, their homes in nearly a dozen districts. They have taken shelter on embankments, highways and the rooftops of buildings. Devi is one of more than 50 people from the villages of Dharahara and Rupauli. They are mostly elderly, female or children. Close to the Nepal border, they were among the first villages affected in Bihar. “Flood waters not only entered our thatched houses; it fully inundated the village. Our past experience reminded us to move to a safer place outside the embankment,” she said. Devkumar Mehta is the husband of a local elected member of Kamalpur panchayat (village council), and arranged four private boats to rescue Devi and other villagers. He expressed unhappiness about the government’s failure to provide boats to evacuate people from marooned villages. “The administration claimed to hire local boatmen for the purpose but they were not paid money for their work last year during floods. How they will work? Boatmen are not ready to work. People were compelled to pay boatmen from their pockets to reach safer places from their inundated villages.”

People being ferried to safety on a boat in Bihar [image: Alamy]

Harendar Paswan and his family took shelter on an embankment in Aurai in Muzaffarpur district after the swollen Bagmati river created havoc in dozens of villages. “Our village is inundated and flood waters spread all around. We shifted to the Bagmati embankment for safety. We are living under a polythene sheet but it failed to protect us from heavy rain,” said Paswan, a farm labourer. Ranjeev (who uses one name), a local river activist, said hundreds of thousands of people are worried as water from rising rivers has been spreading fast. “Fear of inundation is increasing because heavy rains are not stopping. If paddy seedlings are damaged, it will result in heavy crop loss. To date no relief camp or shelter is set up for those forced to flee. There is nothing except government’s preparedness on paper.” Sanjay Jha, the minister of water resources in Bihar, said that after the forecast the government prepared to shift people from low-lying areas, and that a constant vigil was being maintained on embankments. “All embankments were safe, there was no need to panic and field officials were maintaining round the clock vigil to undertake flood protection work.” He added that the eastern Koshi embankment, which was breached in 2008 flooding five districts of northern Bihar, was “totally safe”.

Jha said the Water Resources Department (WRD) has recently launched the “HelloWRD” campaign, which asks people to use the department’s Twitter hashtag to report any visible cracks or breaches in embankments and point out any shortcomings in flood-prevention structures. He added that the department has launched a 24/7 call centre with a toll-free number for flood-affected people. The Pandemic Question The Covid-19 issue is also being considered, according to the government. Avinash Kumar, officer on special duty at the Disaster Management Department (DMD), said flood-relief camps will “maintain physical distancing and pay attention to sanitation and hygiene. All district officials have been instructed to arrange for boats and to increase flood shelters. All people suspected to be Covid positive will be kept at quarantine centres being set up in flooded areas.” The National Disaster Response Force has also been deployed. Vijay Sinha, head of its ninth battalion, said those likely to be involved in relief work will be provided personal protective equipment, including N95 masks, gloves, face shields and other appropriate material. The pandemic and the nationwide lockdown on March 25, have had other consequences for residents. Mahendar Yadav, founder and convenor of the a local people’s organisation Koshi Nav Nirman Manch, said migrant workers returned home hoping to cultivate their farms or get local employment. According to DMD data, the majority of the more than two million migrant workers who returned to the state between May 3 and June 21 are from the flood-prone Koshi and Seemanchal regions. Yadav said that most of them are disappointed. The government failed to provide them with employment despite announcements made two months ago. “Thousands have already left their villages again for livelihood taking high risk amid pandemic as there was no option for them. More will follow in the coming days.” Those cultivating paddy, maize and jute are now very worried about flood damage to their crops. Waters Will Continue To Rise The state’s agriculture minister, Prem Kumar, is worried. He said, “We have received information that standing maize crops in low-lying areas were submerged after heavy rains and paddy seedlings also damaged.” According to an official from the Patna weather office, Bihar had received nearly 55% surplus rain as of Sunday during the ongoing monsoon season. All the reservoirs are completely filled within a month of the onset of the monsoon. Abdus Sattar, assistant professor and agro-meteorologist at the Rajendra Prasad Central Agricultural University, said, “This is the first time in many years that the monsoon has remained continuously so vigorous after its onset. Good monsoon rainfall is now a boon for the farmers as well as possible bane for many.” Read the full article here -
TAGS Lockdown coronavirus pandemic Nepal Monsoon Bihar floods Bihar