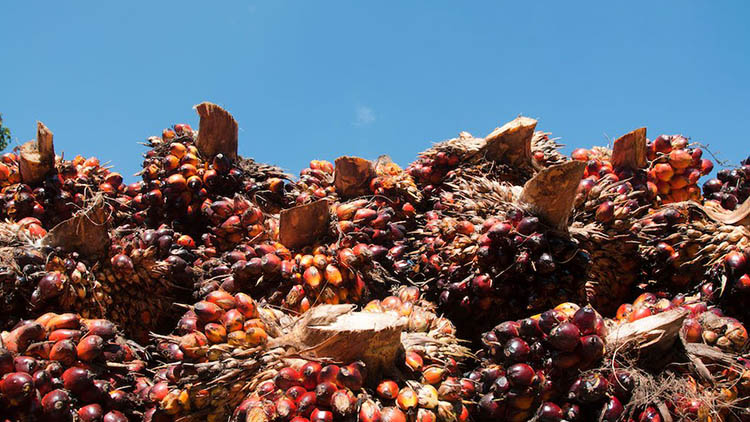 The global agricultural market has been severely shaken by Covid-19. Palm oil is no exception, particularly in India, the world’s largest importer of the commodity. Demand has fallen off a cliff in India since the prime minister, Narendra Modi, imposed a countrywide lockdown on March 24 to contain the pandemic. That has shuttered restaurants and hotels, major consumers of the oil. Consumption of edible oil in India, which is dominated by palm oil, has crashed by nearly 40% since the national lockdown began. Palm oil imports may slump by as much as 25% in 2020, to the lowest levels in at least a decade, experts say. Since 2001, palm oil – which barely figured in traditional cuisines – has gone from accounting for 29% of edible oil consumption to nearly 65%. It blends well with other oils and suits frying, a key consideration in preparing Indian food. What happens to palm oil demand in India has a significant effect on the entire industry. Since India’s palm oil imports account for nearly 20% of the global trade, it has a big effect on efforts to make the production and processing of the commodity sustainable, ensuring that no further environmental damage is done. The same is true for other major import markets such as China and the European Union, which account for 16% and 14% of the global trade respectively. In the EU, increased consumer awareness and government policies have brought about a turn towards sustainable palm oil in recent years. If such efforts can be replicated in India, it will go a long way to preserving rainforests in Southeast Asia. Impact of demand In little under three decades, India has become the biggest buyer of vegetable oils in the world. A rising urban population, changes in consumption patterns and domestic production that has failed to keep up with demand, have contributed majorly to the country’s increasing importation of edible oils. India’s palm oil imports rose by an average of 12% every year in the decade to 2015-16. It imports over 96% of the palm oil it consumes, primarily from Indonesia and Malaysia, the top two producers. As it well as its suitability for cooking, the country’s preference for palm oil has to do with its cheaper price compared with other vegetable oils and the proximity of production, meaning shorter shipping times. 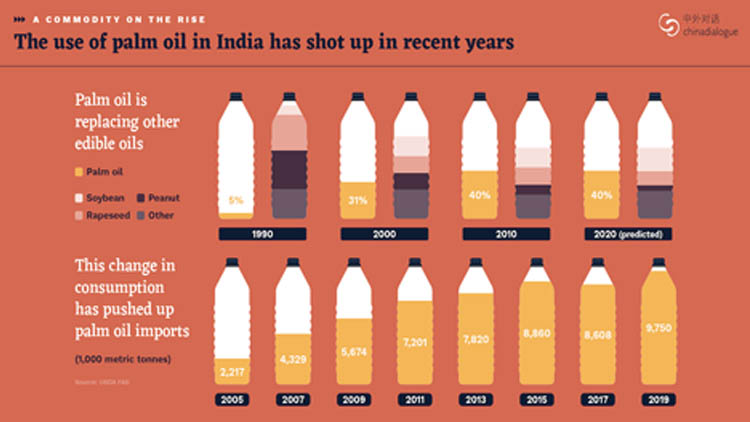 At the same time, global production has been growing steadily in the past five decades. In the 20 years between 1995 and 2015, annual production quadrupled to meet demand, which is forecast to be between 120 and 156 million tonnes by 2050. Already, palm oil plantations account for 10% of global cropland, according to the Center for International Forestry Research. The area of oil palm plantations has increased from 0.5 million hectares (ha) in 1985 to 20 million ha at present, according to World Rainforest Movement, a non-profit organisation. It is projected to reach 25 million ha by 2025. And the expansion of palm oil cultivation has driven deforestation to unprecedented rates. More than a third of large-scale oil palm expansion between 1990 and 2010 has contributed to significant forest cover loss in Indonesia, Malaysia and Papua New Guinea, WWF reports. Species including orangutans, the Sumatran tiger and Javan rhinoceros are on the verge of extinction due to a decrease in habitat as forests make way for plantations. Every year, smoke haze blankets parts of Southeast Asia. It is generated by the deliberate burning of forests to clear land for plantations. In 2019 alone, close to 50 million people were directly affected by smoke caused by the clearing of forests for palm oil plantations. This not only has severe implications for local people and ecology, but also for the global climate due to the sudden large release of carbon dioxide. Value and supply chain Currently, the majority of the import market in India is not driven by concerns linked to these environmental impacts. Research published in November 2018 shows that 58% of palm oil imports into India is not covered by NDPE policies: No Deforestation, No Peat, No Exploitation. The import market in India is extremely price-sensitive, experts and industry insiders say. Importers are primarily looking at the lowest price points for various grades of palm oil and are not yet overly concerned about how the commodity is produced. This is the primary barrier to the uptake of ethical palm oil in the country. This is an edited version, for the full story go to: thethirdpole.net