Between Trauma And Disease: COVID-19 In The Rohingya Camps 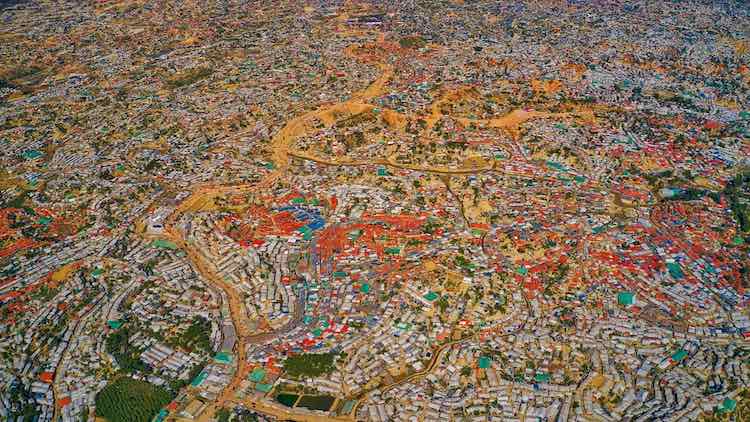 By Nazmun Naher Shishir/thethirdpole.net Narrow alleyways hardly one metre wide are what pass as pathways in the 34 Rohingya camps in Cox’s Bazar, south-eastern Bangladesh, with no space for physical distancing possible. On top of that, a family of five to eight lives in each shack of ten square metres. This lack of space has now become a crippling concern as the Covid-19 pandemic has reached the refugee camps.
Also Read:
Lockdown 4.0: Over 21,000 New Cases Reported In Last Four Days, COVID-19 Cases Cross 1.18

On May 14 Cox’s Bazar Medical College tested samples and one Rohingya man was identified as Covid-19 positive. Abu Toha M R H Bhuiya, Health Coordinator with the Refugee Relief & Repatriation Commissioner (RRRC) said that so far there are six people who have tested positive from the camps, including two women and a child. All of them are from Lambashiya, Kutupalong camp. Among them, one is from block F, Kutupalong East camp. “2,400 families with more than 10,000 family members from Lambashiya’s 1-F, 2-W, 2-D camp are now in lockdown. Twelve isolation centres are in [the process of being set up]. Till the end of June 2020, there will be isolation centres with 19,000 beds dedicated to the Rohingya community. For now, we have facilitated 10 ICU and 10 CCU beds for Rohingya community in Cox’s Bazar Sadar Hospital. Moreover, two ambulances are on standby for the people in the camp in case of any emergency.” According to Bhuiya, there are three ways that the transmission could have happened. Every night trucks from Dhaka, Chattogram and Narayanganj unload goods in the camps. All three cities are badly affected by the virus. A few Rohingya unload goods from those trucks. At night many Rohingya men go to Ukhiya and Teknaf Bazar for goods. At least 191 people in the district are affected by Covid-19. Lastly, three people working with aid agencies have been found Covid-19 positive. They used to visit the camps regularly.

[In Kutupalong, located in Cox’s Bazar district, the narrow alleyways make a mockery of the idea of physical distancing (image: Alamy)]

Now that it has reached the camps, the virus has the potential to spread very quickly. Along with 860,000 Rohingya refugees another 400,000 Bangladeshis in the host communities are at risk. And, Kutupalong, where the virus has been detected, is the largest refugee camp, with a population of 596,306. Therefore a public health emergency could be just a matter of time. “Covid-19 positive Rohingya individuals are now in isolation centres and we already have two dedicated hospitals each of 50 beds in Cox’s Bazar. Kutupalong camp is already locked down. We hope to control this situation with immense care,” said Mahbubur Rahman,  a civil surgeon based at Cox’s Bazar. Lack of communication Aid groups are largely prohibited from entering the camps unless their work is about controlling the Covid-19 spread. WHO, UNHCR, IOM, and many other international and national organisations are working relentlessly. But many residents are still unaware of what they need to do to m9inimise the chances of infection. Many are still trying to go out of the camp. “It is a challenge to control the Rohingya. Now and then they try to escape from camps and make several attempts. Now that it is summer and roads are dry, they take roads through jungles and remote villages to go out of the camp. And it is difficult to identify them because they are indistinguishable from local people and the language is same too. Yet we are trying our best to control them. Seven check posts have been established to control their movement from the camp,” said Cox’s Bazar Police Superintendent ABM Masud Hossain. “The first Rohingya man who was Covid-19 positive escaped from a mosque,” Hossain added. More education and communication materials are needed to spread consciousness among Rohingya. Moreover, mass awareness on hygiene, identification of symptoms, prevention is required. Isolation and hygiene The camps have a 40,000-70,000 persons per square kilometre, almost four times the population density of New York City. Maintaining personal hygiene is a major challenge since space for sanitation is very limited. Many people have to use the same toilet. Moreover, summer has brought a water shortage crisis.

[A Rohingya boy flies a kite in the Jamtoli Refugee Camp. There is little relief within the crowded environs, which makes monitoring those seeking a little space very difficult (image: Alamy)]

“The situation is difficult here. We are trying to improve the conditions. But there is not enough space for people and isolation is impossible inside the camp. I live in one shanty with seven more family members including three women. Everyone is anxious about their daily work and survival. WHO and other national and international organisations are helping us through this time. Many organisations are providing us ration which includes rice, lentils, oil, masalas, potato, fish and a few more items to fulfil our daily nutrition. The grave problem is the crisis of running water,” said Mohammad Alam, Chairman of the managing committee of the Leda Rohingya Camp in Teknaf. Communication is key to ensuring awareness. But in September 2019 the Bangladesh Telecommunication Regulatory Commission directed that internet speeds of 3G and 4G should be barred inside the camps for security reasons. While there have been security issues, and protests, there is little evidence that such measures deal with specific security threats. Instead, they are a broad restriction which is making it more difficult to meet the current challenge. The refugees have little access to information regarding hygiene or the spread of the virus, whether through the internet or social media apps such as WhatsApp. The signal quality of Bangladesh Betar and Teknaf community radio stations is also very poor inside the camps. “UNHCR is working to promote hygiene, though it is very challenging. We are creating communication materials and translating those into different languages to promote through radio stations. It is very challenging because of the poor internet connection. The government should re-establish the connection to the community. We are also distributing posters door to door. We are also concerned about the host community. UNHCR is preparing to open 1,700 beds for isolation and treatment across Cox’s Bazar district. And the government is also involved to prepare isolation centres and treatment facilities,” said Louise Donovan, UNHCR spokesperson at the Cox’s Bazar office. For full story, go to thethirdpole.net