China has declared all cryptocurrencies as illegal in the country. According to the state-run Global Times, the move has been enacted as part of regulation of virtual currency to prevent financial risk and meet climate and environmental objectives,i.e., “carbon peak and neutrality goals” The People’s Bank of China (PBC) has said that cryptocurrencies have no legal tender status in the country. All cryptocurrency businesses have been declared illegal, which means that transactions between sovereign currency and crypto, enabling  virtual currency trading by acting as agents, or being involved as agents in overseas cryptocurrency exchanges and providing those services domestically via the internet are all banned. Cryptocurrency "seriously endangers the safety of people's assets" said the PBC.
Also Read:
PM Modi On US Tour: The Journey So Far

Cryptocurrency trading has been officially outlawed in China since 2019 but had persisted through foreign trading exchanges. Bitcoin’s value slumped to  $41,018.41 after the announcement. CGTN reported that this was done to “lower financial risks and discourage speculative trading”. It futher quoted Zhang Xiaoyan, associate dean of PBC School of Finance at Tsinghua University. He estimated that between one-fourth and one-third of crypto transactions are used for illegal purposes. "The first is that a lot of these cryptocurrencies have been used in illegal transactions, for instance, transactions on drugs. These kinds of dark web transactions should not be encouraged” he said. "The other fact I know from previous data and academic research is that there's a lot of manipulation in this particular market” where regulations may not be up to speed with practices since it is a new landscape. The move has been enacged to protect small and medium businesses, which constitute the backbone of the economy by contributing 60% of GDP and 80% employment. China had been tightening its grip on the cryptocurrency sector in the run-up to this decision, which has been taken in light of crypto mining’s intensive use of electricity which in turn furthers the dependence on coal burning, which has adverse effects on air quality and climate health. China had emerged as an epicentre of global crypto mining, with the Global Times saying “Up to three-quarters of the world's supply of bitcoin has reportedly been produced in China”. The chart below illustrates Chinese dominance of the world’s crypto mining scene, and how the reversal began at the beginning of this year 2021 itself. 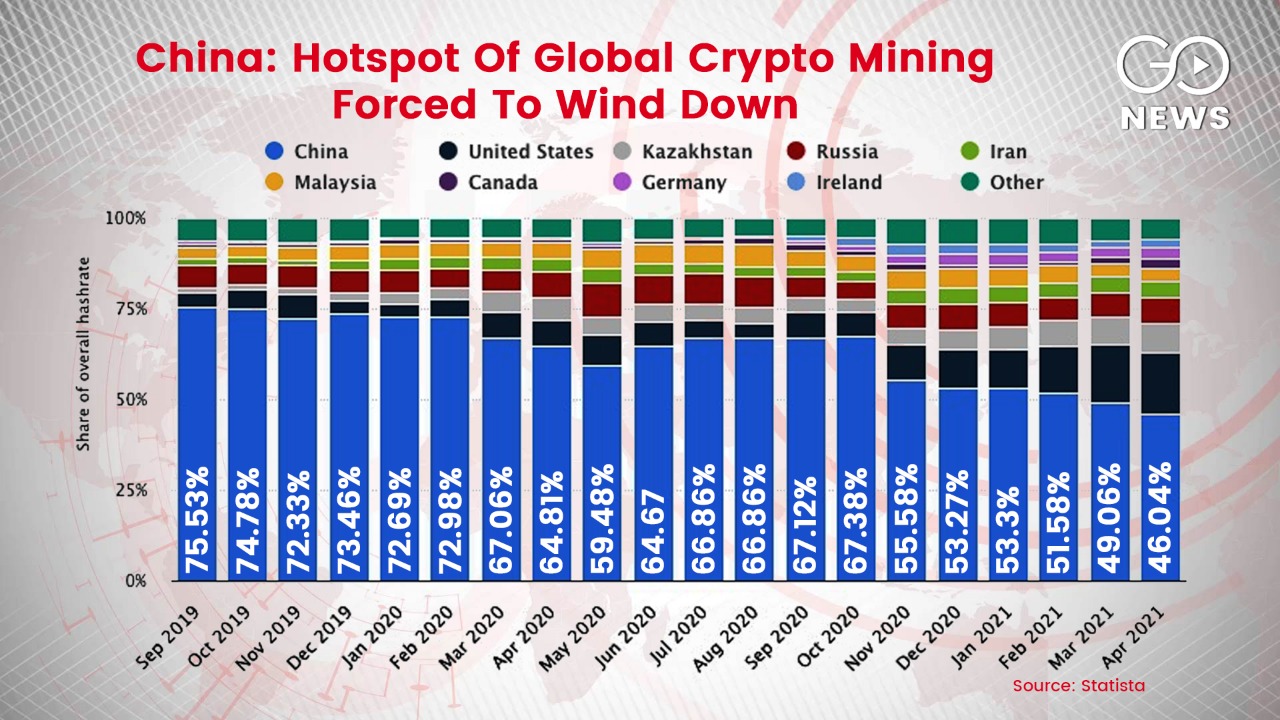 In May this year, the Party mouthpiece Xinhua said: “Compared with traditional investment tools, the risks in the virtual currency market are extremely high, as the market is not mature but with strong volatility, high speculation and lack of clear trading supervision rules” Crypto Mining And Climate Change  China recently committed in the UNGA that it will not fund or set up any new coal-powered projects internationally. One of the reasons being given to rein in cryptocurrency mining is the environmental costs it extracts. China has committed to peak emissions by 2030 and become carbon neutral by 2060. Investopedia has stated that “By the latest estimates, the bitcoin network uses as much energy in one year as the country of Argentina”. It also said, “the bitcoin network also generates 11.5 kilotons of e-waste every year. Cheap availability of hardware and electricity is one of the main driving factors why cryptocurrency mining and trading boomed in China in the first place.