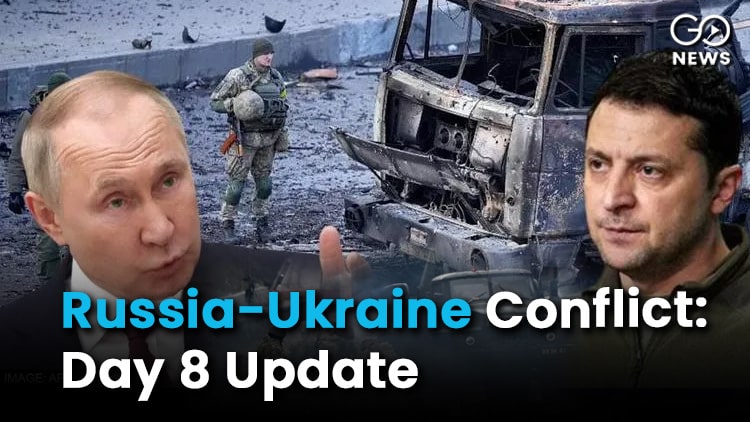 The conflict between Russia and Ukraine has entered its eighth day today, and media reports say that Russia has captured Kherson in southern Ukraine while fighting is ongoing in the cities of Kyiv (capital of Ukraine), Kharkiv, and Mariupol. Ukraine’s foreign minister tweeted the picture below and said that it shows a ‘people’s war’ with active civil resistance against the incoming Russian military. Ukrainian authorities say that 34 civilians were killed today.

This is a true People’s War for Ukraine. Putin has no chance of winning it. On this photo civilians block Russian invaders in Energodar yesterday. One of hundreds of such photos and videos. We need partners to help Ukraine defend itself. Especially in the air. Close the sky now! pic.twitter.com/Wv2uLMWrD4

According to Ukrainian media, there were ‘massive explosions’ in Kyiv which triggered air raid sirens, and intense bombardment and shelling in Kharkiv targeting universities and police buildings. The United Kingdom also stated that the Russian convoy captured in satellite images has been held up 30 km. away from the capital Kyiv by “strong resistance” and logistical issues. The International Criminal Court (ICC) has opened a war crimes probe into Russia for its ‘invasion’ of Ukraine, looking into possible genocide and crimes against humanity. The case has been referred for investigation by 39 countries. Karim Khan, the ICC’s chief prosecutor, said that he will work “as rapidly as possible” to gather evidence, and that an “advanced team” of investigators is already travelling to Kyiv. The armed forces of Switzerland, a traditionally neutral country, reported that Russian airplanes crossed into its airspace over the Gotland island in the Baltic Sea. It wsas also reported that Belarus is aiding injured Russian troopsby ferrying them to a hospital near the Ukrainian border UNHRC Flags Displacement Of 1 Mn. In Russia-Ukraine War The United Nations’ refugee agency (UNHCR) says that over 1 million people have fled Ukraine since the conflict began. Indian students, who constitute the largest national group amongst expatriate students, are also facing difficulties in living in the war-torn country and trying to exit, meeting with alleged hostility from Ukrainian authorities and civilians. The UNHCR’s chief Filippo Grandi terms the fallout of the war in Ukraine as one of the most rapid exoduses he has experienced. The statement says that refugees within and outside the borders of Ukraine are increasing “Hour by hour, minute by minute”.

1 million people have now fled Ukraine to seek safety. Unless there is an immediate end to the conflict, millions more are likely to be forced to flee.

The United Nations General Assembly adopted a resolution calling for immediate Rusian withdrawal from Ukraine, with India, China, and other major Asian countries abstaining. The resolution, however, was passed with a significant majority Russia Releases First Death Toll Of 498, Ukraine Claims 2,000 Civilians Killed Russia has released its first official death toll for its troops in what it terms “demilitarization” and “de-nazification” operations, pegging the number at 498. Russia’s Foreign Minister Sergey Lavrov also said that Russia’s “demands are minimal” and he hopes that a solution will be reached during talks. Ukraine has claimed that 2,000 civilians have been killed in the 8-day long military conflict. It also claims casualties of 7,000 Russian soldiers, as per Oleksiy Arestovich, the military advisor to Ukrainian President Volodymyr Zelenskyy The second round of ceasefire talks between Russia and Ukraine were announced for today, March 3rd. The first round, held in Belarus, ended inconclusively, and could not end the conflict. While Ukraine demanded an end to the attack as a precondition for talks, Russia has stated that Ukraine is delaying the talks on orders of Washington, which Sergey Lavrov saying “it is not an independent country”. Germany Suppplies Weapons, ‘16,000’ Foreign Fighters Arrive In Ukraine Today, Germany announced that it will supply military assistance to Ukraine by sending anti-aircraft missiles. Berlin approved the shipment of 2,700 Soviet-era ‘Strela’ missiles to Kyiv, in the same week as its supply of 500 surface-to-air Stinger missiles and 1,000 anti-tank missiles. Ukraine also claims that 16,000 foreign nationals have come to fight for it against Russia’s military offensive, coming from the U.K, Denmark, and Japan among others.

Foreigners willing to defend Ukraine and world order as part of the International Legion of Territorial Defense of Ukraine, I invite you to contact foreign diplomatic missions of Ukraine in your respective countries. Together we defeated Hitler, and we will defeat Putin, too.