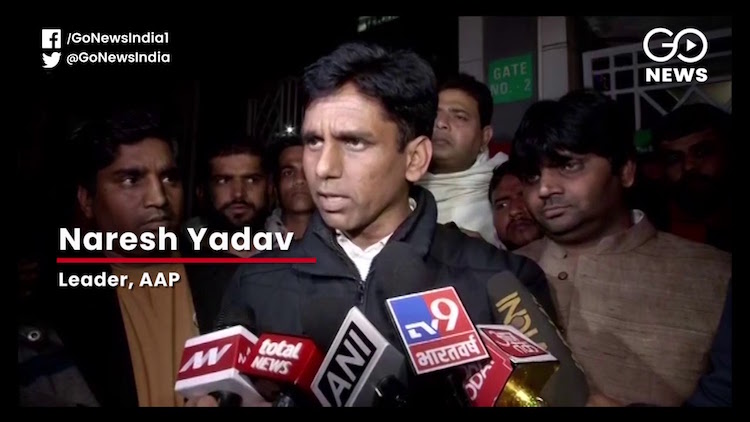 Aam Aadmi Party (AAP) workers across Delhi celebrated with great gusto their party’s bumper win in the Delhi assembly elections on Tuesday. But the AAP revelry was cut short when shots were fired at the convoy of Naresh Yadav, AAP MLA from Mehrauli, late on Tuesday night.  While one worker died in the firing and another was injured, MLA Yadav escaped unhurt, despite a close shave, in the incident. The injured AAP worker has been admitted to a nearby hospital, where his treatment is underway.
Also Read:
Anil Ambani Stocks Destroy Wealth

Assailants opened fire at the convoy of MLA Yadav, who was in an open jeep, around 10.30 pm, when he, along with his supporters, was returning from a temple in Kishangarh village.  While MLA Yadav called the incident very unfortunate, AAP Rajya Sabha MP Sanjay Singh raised questions on Delhi’s law and order situation in light of this incident, through a tweet and held the Delhi Police accountable. The police have filed an FIR in this case and launched an inquiry. Naresh Yadav had won a thumping victory from the Mehrauli seat in the Delhi assembly election results declared on Tuesday. Yadav had polled 62,301 votes and won the election by 18,161 votes.

Gunshots were fired on the convoy of Naresh Yadav, #AAP MLA from Mehrauli on Aruna Asaf Ali Marg. One party volunteer lost his life while another has been injured in the incident. Watch this story for more... pic.twitter.com/L758Th867Q

By Anjali Ojha 1 hour ago

By Sidharth Pandey 4 hours ago