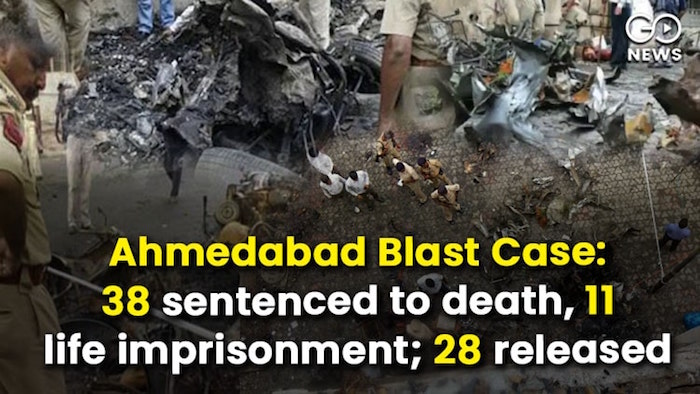 A special court in Gujarat on Friday sentenced 38 out of 49 convicts to death in the 2008 Ahmedabad serial blasts case. Apart from these, 11 convicts have been given life imprisonment. The accused were sentenced to death and life imprisonment under Section 302 of the UAPA and IPC. While giving the verdict, Special Judge AR Patel ordered a compensation of Rs 1 lakh to those who were killed in the blasts. He has also ordered the government to pay a compensation of Rs 50,000 for the seriously injured and a sum of Rs 25,000 for the minors.
Also Read:
After Farm Laws, RSS Affiliate Opposes LIC IPO Move

Usman Agarbattiwala, the only one convicted under the Arms Act and sentenced to death, has also been sentenced to one year imprisonment under the Arms Act. The punishments given to each of the 49 convicts under each section of the IPC, UAPA, Explosive Substances Act and Prevention of Damage to Public Property Act will run simultaneously. Along with this, the court has also imposed a fine of Rs 2.85 lakh on each of the 48 convicts. Agarbattiwala has been fined Rs 2.88 lakh along with additional punishment under the Arms Act. On February 8, the special judge had found 49 out of the total 77 accused guilty under various sections of the IPC, including murder, sedition and waging war against the state, as well as UAPA, the Explosive Substances Act. Apart from these, the court had released 28 out of a total of 77 accused. On July 26, 2008, 22 bombs exploded at various places in Ahmedabad including the State Government Civil Hospital, the Ahmedabad Municipal Corporation-Run LG Hospital, buses, parked cycles, cars and other places in which 56 people were killed. Around 200 people were injured in the accident. The hearing of the case ended in September last year. Earlier, the matter had been notified several times for adjudication, but had to be postponed. In 2008, after the serial blasts, the Gujarat Police busted a nationwide network that was involved in carrying out a series of blasts in the city.According to the police, the banned terrorist organization Indian Mujahideen (IM) and the banned Students Islamic Movement of India (SIMI) were involved in the attacks. The police had also alleged that IM-affiliated terrorists planned and executed the blasts in retaliation for the 2002 Godhra riots which took place in Gujarat. Then there were blasts at many places including the trauma center of Civil Hospital in Ahmedabad. The trial started after merging 35 cases into one case. The FIR was registered in Ahmedabad, where the blasts took place, and in Surat, where the police recovered bombs from various places after the blasts in Ahmedabad. The trial of the case started in 2009 after the statements of 1100 eyewitnesses.