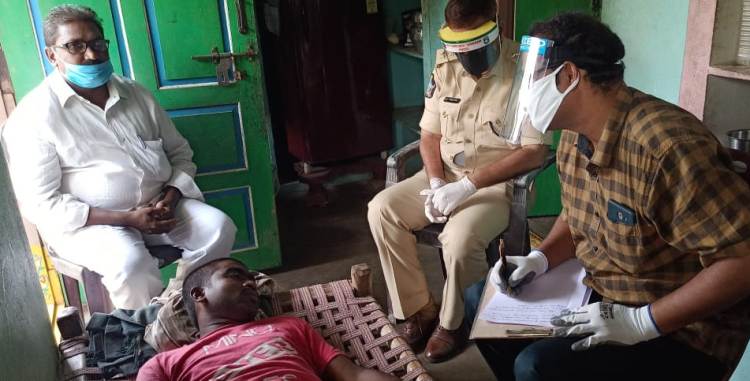 The ruling YSR Congress party of Andhra Pradesh has come on the back foot in the case of victimisation and barbarity with Dalit youth in police custody. The incident took place at Sitanagaram police station in East Godavari district where policemen shaved the head of a Dalit named Vara Prasad, cut his mustache, and allegedly beat him fiercely. After an uproar over the incident, a sub-inspector and a constable have been suspended, while investigation has been started by registering an FIR in the SC-ST Act.

According to the victim Vara Prasad, there was a death in his locality on Sunday and preparations for the funeral were going on. Then a truck loaded with sand was passing from there which was stopped due to the last rites. Soon former sarpanch Krishna Murthy arrived in his car and the matter turned into a quarrel.

According to Prasad, the matter was over there only but the next day a sub-inspector and a constable took them to the police station in the name of investigation. During this time the Sub Inspector allegedly hit him with a belt. After this, a barber was called who shaved Prasad’s head and mustache.

In this case, there was an uproar, and the accused sub-inspector and constable were suspended. DIG of Illuru Range, KV Mohan Rao said that strict action will be taken against the accused policemen so that such incidents do not happen again. DGP Gautam Sawang has also condemned this incident.

Opposition parties like Congress, CPI, TDP have attacked the Jagan Mohan Reddy government over police brutality. Former CM Chandrababu Naidu tweeted that ‘Jungleraj’ has returned in Andhra Pradesh. People who shaved the head of Vara Prasad are associated with Congress. He alleged that the Dalit youth had raised his voice against illegal sand mining. Policemen have become a toy in the hands of the corrupt ruling party.

Jungle Raj has returned to AP. Vara Prasad's head was tonsured by leaders belonging to YCP in East Godavari District's Seethanagaram Police Station. All this happened in the presence of policemen who heckled and beat the man to pulp, destroying the self-esteem of a Dalit man(1/3) pic.twitter.com/kAr8lLoxRl