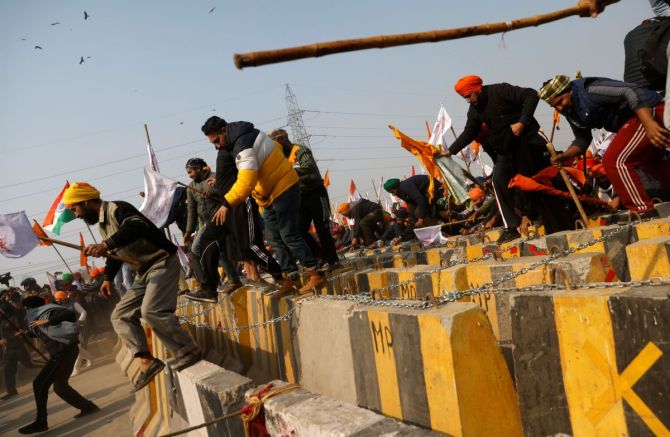 A large convoy of farmers had entered the national capital earlier this morning to take part in the tractor parade, parallel to Republic Day parade, from the Singhu Border on the outskirts of Delhi where they have been camping for the past two months. Earlier in the day, the farmers' protest took a violent turn as chaotic scenes were witnessed as hundreds of protesters entered Red Fort after breaking police barricades, chasing police personnel with sticks and ramming their tractors into the buses at ITO. A protester was killed near ITO after he was shot at and the tractor he was driving turned turtle. A cop has also been injured at Red Fort.
Also Read:
Indigenous People Demand New Home After Exclusion From Assam National Park

Amid unprecedented scenes in the national capital, Social activist Yogendra Yadav appealed for peace and urged protestors to stay on the route decided by the Sanyukt Kisan Morcha and also asked to avoid rumours so that the months-long peaceful protest doesn't go to waste.

Social activist @_YogendraYadav appeals for peace amid unprecedented scenes in the national capital. Yadav urged protestors to stay on the route decided by the Sanyukt Kisan Morcha and also asked to avoid rumours so that the months-long peaceful protest doesn't go to waste pic.twitter.com/6TWx63rMOm

The umbrella body of 41 farmer unions 'Samyukta Kisan Morcha' also issued a statement distancing itself from the ‘violent elements’: "We thank farmers for the unprecedented participation in today's Farmers Republic Day Parade. We also condemn and regret the undesirable and unacceptable events that have taken place today and dissociate ourselves from those indulging in such acts.  Despite all our efforts, some organisations and individuals have violated the route and indulged in condemnable acts. Anti-social elements had infiltrated the otherwise peaceful movement. We have always held that peace is our biggest strength, and that any violation would hurt the movement.  The long struggle for more than 6 months now, and more than 60 days of protest at Delhi borders also seemed to have led to this situation. We dissociate ourselves from all such elements that have violated our discipline. We appeal strongly to everyone to stick to the route and norms of the Parade, and not indulge in any violent action or anything that taints national symbols and dignity. We appeal to everyone to desist from any such acts.  SKM has been trying to get a full picture of all the events with regard to the several Kisan Parades that were planned today and will share a fuller statement soon."