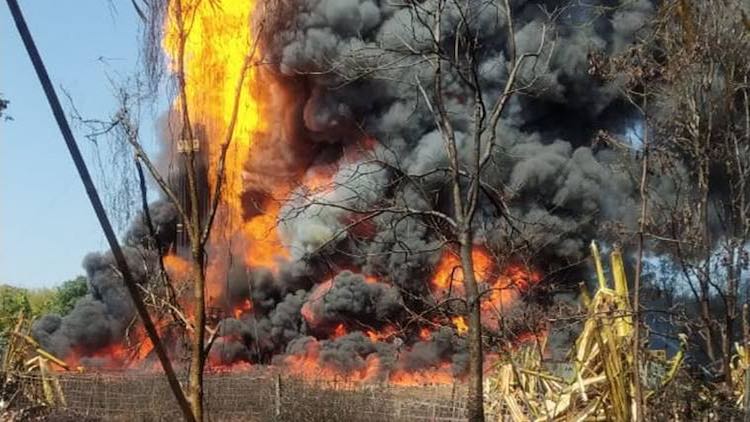 At least two people died and several were injured as the massive fire from a natural gas well in Tinsukia’s Baghjan Oil Field in Assam spread to nearby villages. Over 30 houses have been gutted in the fire and 2,000 people have been moved to safety.
Also Read:
COVID-19: Close To 10,000 Cases For 6th Day Running, Recoveries Surpass Active Cases For F

The flames rising from here are so high that they are visible from three kilometers away. The gas well where the fire broke out is operated by state-owned Oil India Limited (OIL). Apart from Oil India Limited, ONGC, various fire tenders of Tinsukia and Dibrugarh districts are engaged in putting out the fire. The oil well first burst on May 27 and since then, gas continued to leak. Amid the clearing operations, the oil well exploded into flames on the afternoon of June 9, following which the fire has taken a frightening form. After the Chief Minister Sarbananda Sonowal’s appeal, Air Force teams have also started extinguishing the fire. Assam Congress President Ripun Bora has urged the Central Government to intervene immediately. People from the surrounding areas have been demonstrating against the State Government for two weeks, after which the police and paramilitary have been deployed to control the situation. Assam NDRF says that a team of experts has been called from Singapore for rescue operations. “The situation demands the arrangement of large quantities of water, installation of high discharge pumps and removal of debris. All the operations as per ‘Alert Disaster Control’ (Singapore based firm) will take about four weeks. Efforts will be made to reduce this timeframe as much as possible,” a press release issued by the OIL said. The Baghjan Oil Field is just a kilometer away from Maguri-Motapung Wetland and right next to Dibru-Saikhowa National Park. The oil leakage since the past 14 days has caused grave damage to the region’s wetlands and biodiversity. Several fishes and birds, including the Gangetic river dolphins, have died so far.