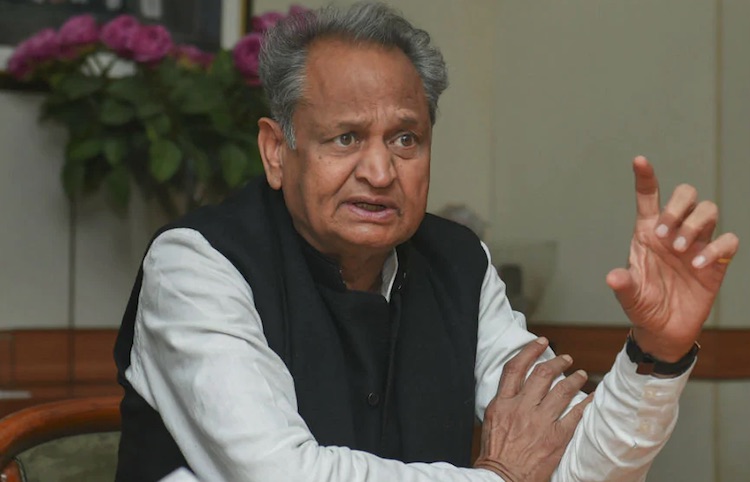 Chief Minister Ashok Gehlot lashed out at the BJP and state’s former deputy CM and party leader Sachin Pilot amid the political crisis in Rajasthan for a week. He said that a few days ago the purchase and sale of MLAs was going on. We have evidence of this. If we had not transported our MLAs to the hotel 10 days ago, then what is happening in Manesar today would have been happening then.

Horse trading was being done in Jaipur, we have the proof. We had to keep people at a hotel for 10 days, if we had not done that, the same thing that is happening in Manesar now would have happened back then: Ashok Gehlot, Rajasthan Chief Minister pic.twitter.com/tFQT0GVqpj

Without naming Sachin Pilot, he said that speaking good English, making beautiful statements, and looking attractive is not all. What’s in your heart for the country, your ideology, policy, and commitment, also matters.

Speaking good English, giving good bytes and being handsome isn't everything. What is inside your heart for the country, your ideology, policies, and commitment, everything is considered: Ashok Gehlot, Rajasthan Chief Minister pic.twitter.com/xHS5WzajWb

Gehlot also said that he has been in politics for 40 years and loves the younger generation very much. He said that only the new generation of people became Union ministers, became the presidents of states and the future belongs to the young generation. Gehlot said what did we do in our era, if the new generation had to go through it then they’d understand everything.

I have been in politics for 40 years, we love the new generation, the future will be theirs. This new generation, they have become central ministers, state presidents if they had gone through what we did in our time, they would have understood: Ashok Gehlot, Rajasthan CM pic.twitter.com/2QpXs8rexM

CM Ashok Gehlot has been seen in such an aggressive attitude for the first time since the crisis started in the state. Hours before his aggressive stance, Sachin Pilot had made it clear that he would not go to BJP. He is still with the Congress.

Meanwhile, the Congress Party has dissolved all the district committees and block committees of Rajasthan with immediate effect. Rajasthan Congress in-charge Avinash Pandey said that new committees will be formed soon.

Meanwhile, senior Congress leader Salman Khurshid has also reacted to the Sachin Pilot fiasco. He said, 'Interesting that many of our colleagues have become ‘leaders’ because of generous support of top leadership and demand more support because of being ‘leaders’. Trust and allegiance cannot be conditional. It is there or it is not.’

Interesting that many of our colleagues have become ‘leaders’ because of generous support of top leadership and demand more support because of being ‘leaders’. Trust and allegiance cannot be conditional. It is there or it is not.

Family disputes should be easy to memd but are sometimes worse for being in the family. Respect and affection is legitimate expectation but demanding constant physical proof undermines the basis of relationship. Have to be human first, trader later.