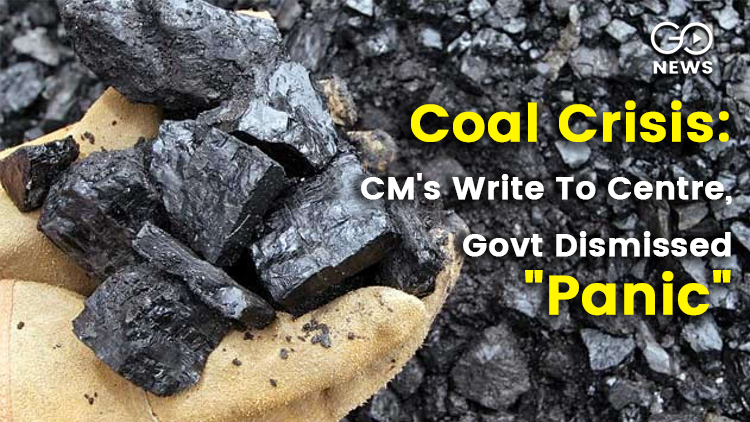 Punjab CM Charanjit Singh Channi and Delhi CM Arvind Kejriwal criticized the Centre regarding the ongoing coal shortage problem which is bound to lead to electricity cuts and blackouts. Utility providers have started enforcing unscheduled cuts and load shedding as over a half of the country’s coal plants have been placed on outage alert. Delhi’s Power Minister Satyendra Jain had said on 9th October that "If coal supply doesn't improve, there will be a blackout in Delhi in two days”, adding that: "The coal-fired power plants that supply electricity to Delhi have to keep a minimum coal stock of one month, but now it has come down to one day”.
Also Read:
UNDP Poverty Report: India's ST's, SC's, OBC's Suffer The Most

Jain had furthered compared the coal crisis to the recent oxygen crisis during the second surge of COVID-19, referring to it as “man-made”. Today, Punjab CM Charanjit Singh Channi reiterated the same demand for increased allocation of coal as per the determined quota for the state that has a demand of over 9000 MW. In the absence of sufficient coal supplied by Coal India, power generation has been curtailed and rotational load shedding is being enforced in two plants run by Punjab State Power Corporation Limited and three by private players. Delhi Chief Minister Arvind Kejriwal has said: "The situation is critical and many CMs have written about it to the Central govt. We all are working together to improve the situation”

Delhi could face a power crisis. I am personally keeping a close watch over the situation. We are trying our best to avoid it. In the meanwhile, I wrote a letter to Hon’ble PM seeking his personal intervention. pic.twitter.com/v6Xm5aCUbm

Odisha Industry Body UCCI Writes To CM On October 8th, Odisha’s industrial association, Utkal Chamber Of Commerce & Industry Ltd. (UCCI), wrote a letter to CM Naveen Patnaik in which it said: "We would like to bring to your kind attention the current acute coal shortage situation in the State with many units having stock out or critical coal stock seriously affecting the viable operation of the industrial units”. It said that not only small and medium scale enterprises, but also large processing operations such as those for steel, aluminium, etc. may soon become unviable under the present scenario. The letter points out that even though Odisha by itself is coal-abundant, having 25% of the total national reserves, it is being forced to import coal and electricity at higher rates. Odisha’s industries need 60% of the state’s coal production to function viably, whereas 65% of it is being diverted to other states, hitting local industries. UCCI has said that this will adversely impact employment and domestic value addition. It will hit manufacturing and dampen investor sentiments, thus seeking the CM’s intervention in the matter. Government Stance However, Union Power Minister has said that there is unnecessary “panic” being created about the coal supply shortage. He categorically stated that "In effect, neither there was, nor there is any crisis. It was created unnecessarily." Regarding the SMS that was sent to customers of Tata Power Delhi Distribution Ltd (DDL) operating mainly in north-western Delhi, Singh said that the company had been warned for “irresponsible behaviour”: "I've warned Tata Power CEO of action if they send baseless SMSs to customers that can create panic. Messages by GAIL and Tata Power qualify as acts of irresponsible behaviour”. The Discom’s SMS to its customers read as follows: “"Due to limited coal availability in generation plants across north, power supply scenario between 2 pm to 6 pm is at critical level. Kindly use electricity judiciously. Be a responsible citizen. Inconvenience caused is regretted - Tata Power-DDL." Singh took aim at the Congress which has taken aim at the Centre for what it calls a “Modi-made” crisis. He retorted: “Unfortunately, the Congress party has run out of votes and therefore they are running out of ideas as well”.

The Coal Ministry has ‘clarified’ that while inventory is low, that does not mean that power generation will be hit since stocks are being replenished on a day-to-day ‘rolling basis’. In a press release, it had stated: "The ministry of coal reassures that ample coal is available in the country to meet the demand of power plants. Any fear of disruption in power supply is entirely misplaced”. It further added: "Due to extended monsoons the despatches were constrained. The coal available at the power plants is a rolling stock which gets replenished by the supplies from the coal companies on a daily basis. Therefore, any fear of coal stocks depleting at the power plant end is erroneous". Below is a Tweet by Prahlad Joshi, Union Coal Minister:

Assuring everyone that there is absolutely no threat of disruption in power supply. There is sufficient coal stock of 43 million tonnes with @CoalIndiaHQ equivalent to 24 days coal demand. pic.twitter.com/frskcJY3Um