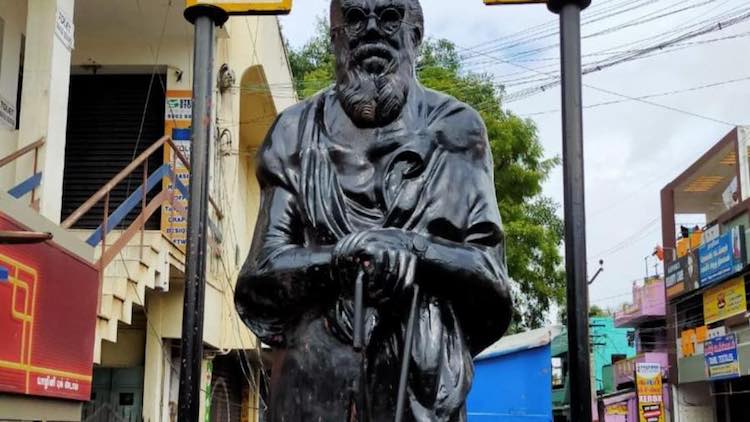 Uproar has mounted in Tamil Nadu after saffron paint was thrown on the statue of social reformer EV Ramaswamy Periyar. A case has been registered in the case at Kuniyamuthur police station against Arun Krishna, an activist of a saffron organization 'Bharat Sena'. It is alleged that Arun Krishna and his supporters smeared the Periyar statue with the 'saffron color' on Friday morning in the Sundarpuram area of ​​Coimbatore. However, after the case was filed, accused Arun Krishna surrendered. Activists of several parties and organizations including DMK, MDMK and VCK have protested over the daubing on Periyar's statue and demanded strict action against the accused.
Also Read:
Uproar After Dalit Youth Found Dead In Gujarat's Banaskantha

According to media reports, the incident took place at 5:30 am. Two policemen were stationed at the scene but due to rain, the policemen went away from the site, when the deed was carried out. However, this is not the first incident of desecration with Periyar's statue. Earlier in January this year, another statue was vandalised in Kanchipuram area of ​​Tamil Nadu. In 2019, on the occasion of Periyar's birth anniversary in Dharmapuri district of Tamil Nadu, some youths had made objectionable videos and put them on Facebook, which also caused a lot of controversy.