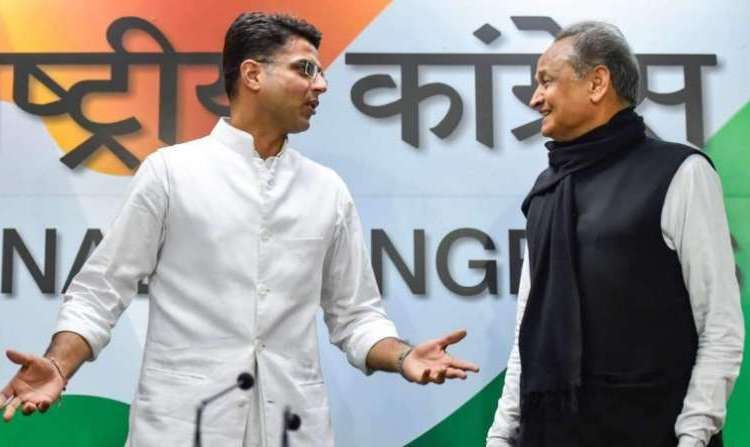 Following talks of the rebellion of Rajasthan’s Deputy CM Sachin Pilot, the Congress high command on Sunday night sent Randeep Singh Surjewala, Ajay Maken and Rajasthan in-charge general secretary Avinash Pandey to Jaipur. After reaching Jaipur, the three leaders held a press conference late night at 2.30 am. In the press conference, Avinash Pandey said that 109 MLAs have already given a letter of support to Congress Party and Chief Minister Ashok Gehlot and many other MLAs are still in contact with him.

Avinash Pandey said that the Congress Legislature Party meeting has been called at around 10.30 am on Monday and a whip has also been issued to all Congress MLAs. He also said that disciplinary action will be taken against those who will not be present in the meeting of the legislature party and membership of their party can also be terminated.

A whip has been issued to all party MLAs to be mandatorily present at Congress Legislature Party meeting to be held tomorrow morning. Strict disciplinary action will be taken against any MLA who is absent without mentioning personal/special reason: #Rajasthan Congress in-charge https://t.co/adTEHg0iM1 pic.twitter.com/xrdqiCYNn9

On Sunday, there were talks of Pilot having the support of 30 MLAs and joining BJP. Meanwhile, Jyotiraditya Scindia, an old Congressman, tweeted, "Sad to see my colleague Sachin Pilot also being sidelined and persecuted by Rajasthan CM. It shows that talent and capability find little credence in Congress.”

Sad to see my erstwhile colleague, @SachinPilot too, being sidelined and persecuted by Rajasthan CM, @ashokgehlot51 . Shows that talent and capability find little credence in the @INCIndia .

Earlier, the special branch of Rajasthan Police SOG had issued notices to the Chief Minister, Deputy Chief Minister and other MLAs for recording their statements in the alleged conspiracy to destabilise the state government. CM Ashok Gehlot on Saturday alleged that the BJP is trying to bring down his government by offering Rs 15 crore to his MLAs.

It is being speculated that the reason for Sachin Pilot's latest tussle is being ignored by CM Gehlot and the party. The latest tussle is about the post of President of Rajasthan Congress, for the last 7 years Sachin Pilot is the President of Rajasthan Congress and he wants that someone close to him gets command of the post of President. But CM Ashok Gehlot does not want to give this position to any close associate of Pilot.