Haridwar Hate Speech Case: Police Has Nabbed Only 2 Out Of 5 Accused 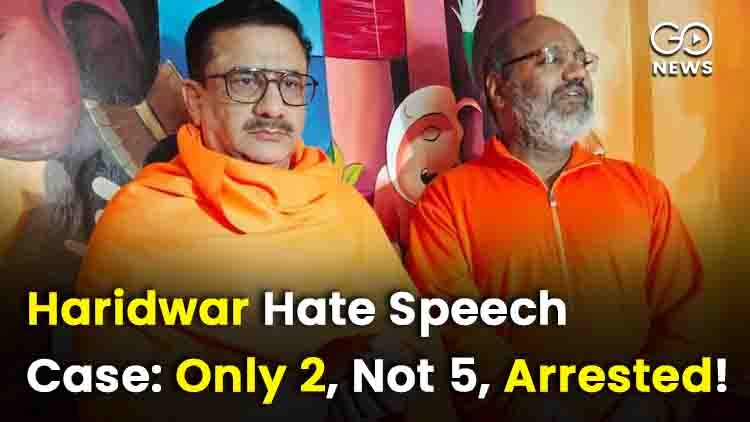 The Uttarakhand Police has reportedly made its first arrest in the Haridwar hate speech case and has taken former Shia Waqf Board chairman Wasim Rizvi, a ‘convert’ to Hinduism who now goes by the Brahmin name Jitendra Tyagi, into custody. However, Swami Narsinghananda who was present with Tyagi at the conclave and during the time of his arrest, has not been apprehended by the police yet. The Uttarakhand police has tweeted from its official handle where it said that “the investigation into Haridwar Hate Speech case is being conducted by an SIT, which has identified 5 suspects and is proceeding against them according to the law. Some TV channels are showing that these 5 people have been arrested, which is wrong”.

Correction | Five people have been booked in the Haridwar hate speech case. An SIT is investigating the case. He (Wasim Rizvi) has been arrested in this case: Uttarakhand DGP Ashok Kumar pic.twitter.com/hE15ELWeuE

Also, the ANI has not named any of the suspects booked in the case and has also not specified whether the Uttarakhand police has registered fresh cases or repeatedthe same charges for all individuals. On 23rd December 2021, the police had registered an FIR and on 26th December it added two more names to it. According to a report by The Hindu, the police had named Jitendra Tyagi, who was formerly Wasim Rizvi before converting and becoming a Brahmin Hindu, along with unknown ‘others’ whose names have not been made public. On 26th December the police added two more names to the FIR: self-styled ‘Swami’ Narsinghananda and ‘Sadhvi’ Annapurna a.k.a. Pooja Shakun Pandey. Section 153-A (promoting enmity between groups) was invoked in the FIR filed on 23rd December. Now, a serious question arises on the fact that five people have been booked and two, Jitendra Tyagi alias Wasim Rizvi and Yati Narsinghananda Giri alias Deepak Tyagi.  Self-Styled Swami’s Words Go Viral On Social Media A video showing ‘Swami’ Yati Narsinghananda Saraswati, a.k.a. Deepak tyagi, in an altercation with Uttarakhand police has gone viral on social media, and he is seen shouting: “Why is Tyagi [Jitendra Tyagi a.k.a. Wasim Rizvi] being arrested?” and the police can be seen asking Narsinghananda to “cooperate”.

During Tyagi’s arrest, Narsinghananda said to the cops: “I am with him in all three cases. Why him alone?”. He can also be seen threatening the police, saying: “You will all die along with your children”.  In another video, the Swami’s supporters can be seen thronging outside a police station, and he can be heard saying: “Put in as much money as is needed”. In yet another video that surfaced after Jitendra Tyagi’s arrest, Narsinghananda is saying: “We have no faith in the Supreme Court or this Constitution”. Narsinghananda Arrested By Uttarakhand Police   The Uttarakhand Police has registered two separate cases against Narsinghananda Giri alias Deepak Tyagi, one for the Haridwar Hate Speech case and another registered recently for derogatory remarks against women. This came four days after the Supreme Court issued a notice on a petition alleging that action was not being taken on genocide calls issued at the conclave. An FIR was registered against Narsinghananda on January 12th, under Section 509 of the IPC (word, gesture or act intended to insult the modesty of a woman). The State’s DGP (Director General of Police) Ashok Kumar said: “When he did not honour the notice, he was arrested in both the cases — for hate speech and making derogatory remarks against women. We sought his judicial remand from court and he has been sent to 14 days judicial custody,” Haridwar Hate Speech Case In Supreme Court! After this case was taken up by the Supreme Court, the Uttarakhand Police seems to have jumped into action. On Wednesday, the Supreme Court asked the Home Ministry, and the police chiefs of Delhi and Uttarakhand Police, to reply to two petitions that submitted that those who made offensive speeches inciting violence against Muslims were yet to be arrested. A ‘Dharma Sansad’ (religious conclave) was organized between 17th-19th December, 2021, In Haridwar, Uttarakhand. This was organized under the presidency of the ‘Mahamandaleshwar’ of Juna Akhada Yati Narsinghananda Giri. Hindu Saints and religious leaders had gathered in significant numbers for the event.   Along with other participants, ‘Dharmadas and Sadhvi Annapurna Bharti called for the genocide of Muslims, and raised slogans calling for the same. After this, another ‘Dharma Sansad’ was organized in Raipur, Chhattisgarh, where allegedly, there were state Congress leaders present as well. Here too, calls were issued for “killing” of Muslims, and a certain Kalicharan Maharaj a.k.a. Abhijeet Sarang also abused Mahatma Gandhi at the event. He has been charged under sections 153 and 505(2) of the Indian Penal Code. Kapil Sibal, senior advocate, and Congress leader who is one of the petitioners in the Supreme Court, has said that another such ‘Dharma Sansad’ event is in the works, scheduled for 26th January, and should be stopped preventively.