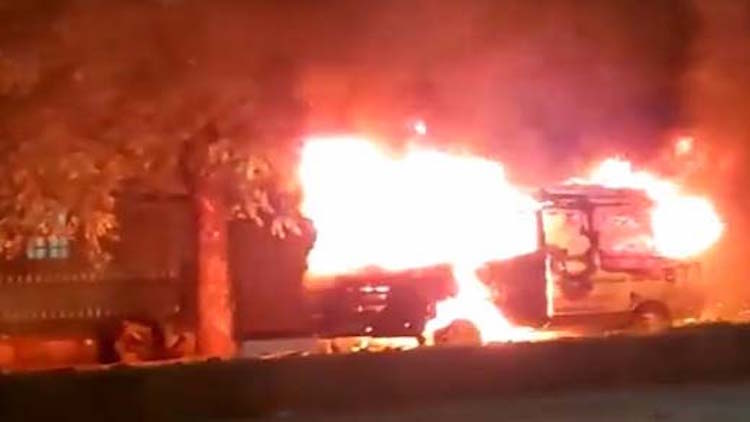 So far, more than 29,000 deaths have occurred due to the coronavirus infection in the country. In many areas of the country, outraged families are targeting doctors and health workers due to death. Now an ambulance of Belagavi Institute of Medical Sciences in Karnataka was set ablaze by the angry mob. The death of a patient at Belagavi Institute of Medical Sciences made his family members so outraged that they threw stones at the hospital and entered the ICU and tried to beat the doctors. A video of this attack has also gone viral in which the ambulance is burning.
Also Read:
UP: Congress Attacks Yogi Govt As Hindu Sadhu Found Hanging In Sultanpur

According to Belagavi police, the ambulance was empty at the time of the attack and about 40 people tried to enter the hospital. The police have registered a case and its investigation has started. Doctors have also opened a front against the increasing attacks in the BJP ruled state of Karnataka. Resident doctors of Karnataka performed duty by tying a black band on Friday. It is also a complaint of doctors and health workers that they are neither getting protection from the police nor the administration is providing them the necessary goods including PPE kits. The nurses of KIMS Hospital in Hubli have stopped work till the demand for safety gears is not met. In recent times, there has been a sharp rise in corona cases in Karnataka and it has become the fourth most affected state after Maharashtra, Tamil Nadu and Delhi. A record 4,764 corona-infected patients have been found here on Thursday, after which the total number of patients in the state has reached 75,833. At the same time, the figure of those who died of corona in the state has been 1,519.