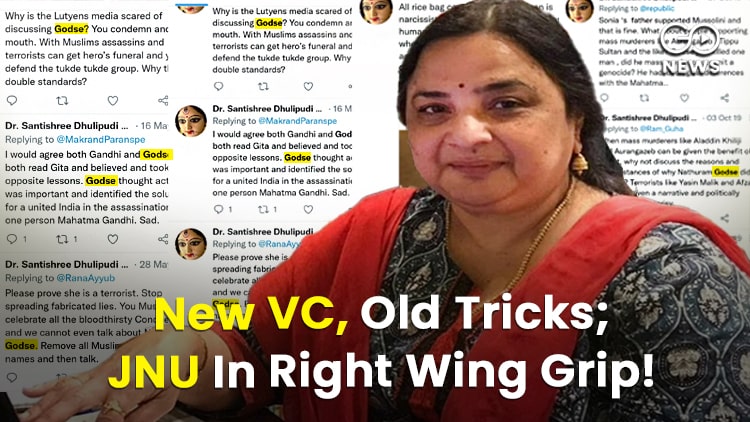 The command of Jawaharlal Nehru University has now been handed over to the right wing with the appointment of the varsity's "first female vice chancellor". The Education Ministry announced the appointment today, on Monday. The new Vice Chancellor Shantishree Dhulipudi Pandit's love for Godse has emerged on social media and she is being described as a Godse lover. Pandit, 59, is also an alumni of JNU, where she pursued her MPhil as well as PhD in International Relations.
Also Read:
Karnataka HC To Hear Plea Against 'Hijab Ban' Today

A senior education ministry official said, “President Ram Nath Kovind, who is the visitor of the university, has approved the appointment of Shantisree Dhulipudi Pandit as the Vice-Chancellor (VC) of JNU. Her appointment will be for a period of five years. Before this announcement, Shantisree Pandit, who was the Vice Chancellor of Savitribai Phule University in Maharashtra, has also been seen defending the BJP. She wrote in one of her tweets dated 20 December 2020, "If BJP is Godse's party then all those parties who support Muslims like TMC is a terrorist and a party of infiltrators, who raped and destroyed Hindu religious places. They support the butchers of Bengal."

In October 2019, she also commented on the Congress party. She had said, “Godse – Yasin Malik is better than terrorists and killers like Geelani and all those whom the Congress party supports.” The Godse love of the new Vice Chancellor of JNU can be seen in her almost tweet. Regarding the father of Congress interim president Sonia Gandhi, she said, "Sonia's father used to support Mussolini and it is right. What about mass killers like Aurangzeb, Tipu Sultan? Godse killed only one man, did he commit mass murders or did he commit genocide?" The anti-farmer mentality of the new Vice Chancellor can also be seen on social media. Retweeting a tweet on 22 May 2021 during the Kisan Andolan, she called farmers "leechd" and called Rakesh Tikait a "liar and a loser". 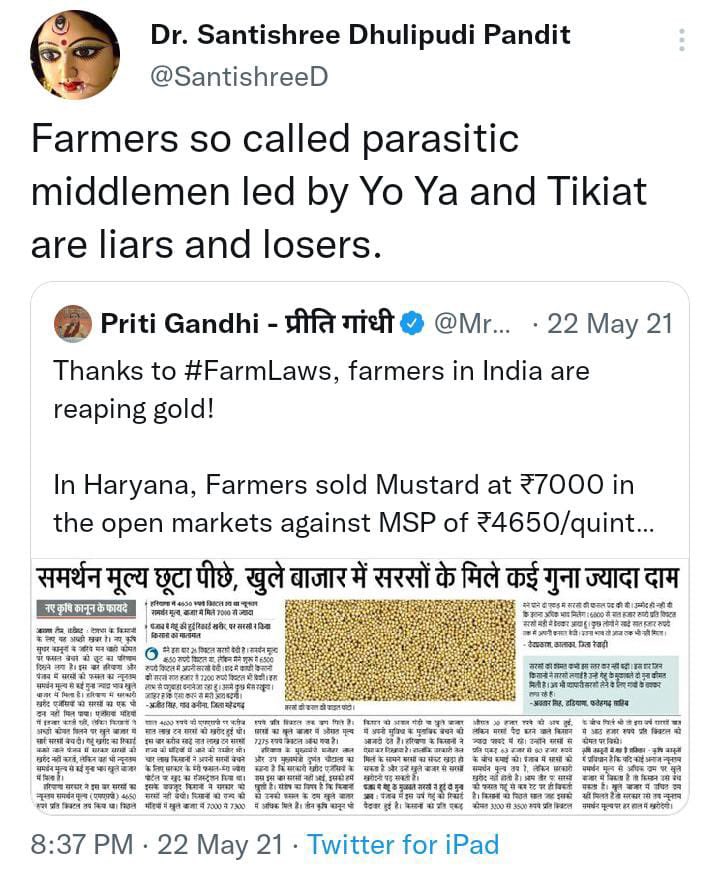 The controversial vice chancellor has also said that "IIT Bangalore and JNU can produce real jihadis for you." She said this on the news reported by ANI quoting sources that allegedly "investigation has revealed that Sharjeel Imam is very fundamentalist and believes that India should be an Islamic State". " Not only this, the VC has also had a tough stand towards JNU. In one of his tweets on 11 January 2020 after the violence on JNU campus in January 2020, she said, “JNU losers have lost their control. Ban these fundamentalist naxal groups from the campus. Stop funding communal campuses like Jamia and St Stephen's. Till now M. Jagadesh Kumar, who was holding the charge of acting VC in JNU after his five-year term ended last year, was appointed as the president of the UGC last week. The tenure of the former VC of JNU has been full of controversies. During his tenure, there have been large-scale protests on the campus. During his tenure, violence took place on a large scale in the campus in January 2020. On January 5, 2020, around 50 masked men and women armed with rods and hammers attacked students on the JNU campus and ransacked hostels and other buildings for several hours before police intervened. In August 2021, a year and a half after the violence, Minister of State in the Ministry of Home Affairs Nityanand Rai told Parliament that no one had been arrested for the attack. Now it remains to be seen how much the campus and its inhabitants are affected during her tenure.