Migrants' Exodus Continues As Centre And States Fail Them 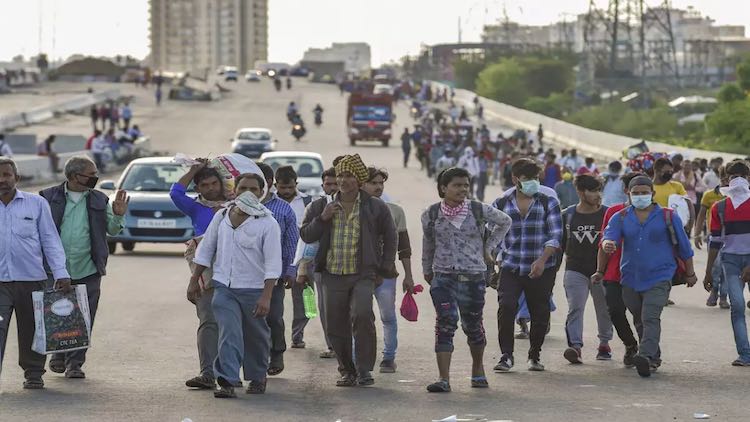 The exodus and suffering of migrants continue, with the Centre and state governments failing to stop the flow and give much-needed aid. Thousands are walking in the May heat from the metros in a bid to go home, including children and infant-bearing mothers. The Central and state governments have failed miserably in ensuring that migrant labourers reach their homes.
Also Read:
On The Rise Coronavirus Cases In India: State-Wise Data

Labourers are reverse-migrating to their homes in the hinterland from several metropolises, including Delhi, and groups of them can be seen walking along various parts of the country’s National Highways. Mothers carrying infants and toddlers keep on walking in the scorching heat of May. All borders between Delhi and Uttar Pradesh are sealed and labourers have gathered everywhere.  Rita, who reached the Delhi-Ghazipur border along with her child said, “I belong to UP’s Hardoi. My landlord has evicted me because I was unable to pay the rent. No other option remains but to walk towards home along with my children.” The distance from Delhi to Hardoi is around 500 km and several families, like Rita’s, are stranded at the Delhi-UP border, along with their children. Meanwhile, migrant labourers in large numbers are starting out for UP and Bihar on bicycles, rickshaws and autos as well. Dhananjay Kumar, who belongs to Bihar’s Madhubani, started off from Maharashtra by auto, along with five of his companions and has reached Lucknow. He said, “I used to work as a food delivery boy. After a wait of two months, when I felt that the Nitish Kumar government will do nothing, I decided to start off for Bihar by auto.” An auto driver from Jharkhand is returning home along with his family. He said that he had no other option but to go back home after having no work for the past two-and-a-half months. It had become difficult to stay on in Maharashtra without money, he added. The journey back home is also proving to be lethal for labourers. They are being killed in road accidents every day but it has become a compulsion for them to leave their homes in the city.  On Wednesday, eight labourers had died in a collision between a bus and a truck in Madhya Pradesh’s Guna district. A similar accident took place on Thursday as well and 13 labourers who were injured in it have been admitted to a hospital. All of them were returning from Pune to Uttarakhand by bus.