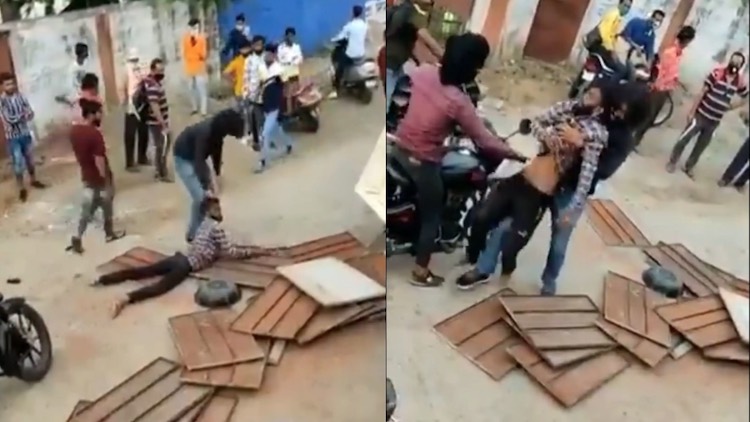 An auto driver was brutally beaten up after his vehicle allegedly hit a girl riding a scooty in Madhya Pradesh’s Jabalpur district. The video which went viral showed two men mercilessly thrashing the driver with an iron plank until he became unconscious in Shobhapur under Adhartal police station area.
Also Read:
Air Quality In Delhi-NCR Turns Hazardous, AQI Hits 547 In Greater Noida

According to the police, the driver had allegedly rammed into a scooty, causing the girl to fall down and suffer some injuries. Shortly after this, the girl called her relatives and some people arrived in a car which didn't have a number plate. The accused did not stop here, they loaded the auto driver upside down on a bike and took him with them, while everyone present there watched as a mute spectator and recorded videos on their mobile phones, but no one tried to save him nor did any policeman reach there.

In Jabalpur, the auto hit the scooty rider.

The girl called her relatives there.

The accused beaten up the auto driver in a Taliban style.

The accused is a famous crook in the area.

Following the MLA’s tweet, the Police swung into action. Jabalpur SP Siddharth Bahuguna said that the incident happened at 4.15 pm on Sunday. After which the girl filed a road accident report at Adhartaal police station. But on Monday, a video surfaced, in which two people are brutally assaulting the auto driver, Ajit Vishwakarma. The police said the accused, identified as Abhishek alias Gunni Dubey and Chandan Singh, are on the run. A case has been registered against them and the police are looking for them, while auto driver Ajit is being treated in a hospital.