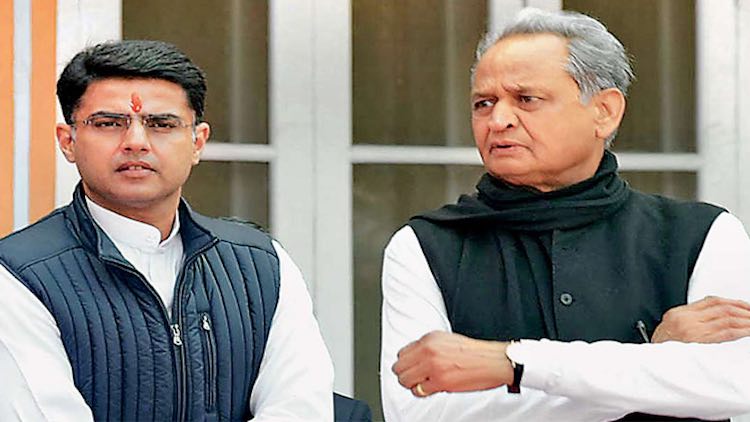 Following the open rebellion of Deputy Chief Minister Sachin Pilot in Rajasthan, as many as 100 Congress MLAs are present at the Chief Minister Ashok Gehlot’s residence for a legislative party meeting in Jaipur on Monday.  The Congress had called a Legislature Party meeting at around 10.30 am on Monday and a whip was issued to all party MLAs that strict disciplinary action will be taken against those MLAs who do no turn up for the legislature meet.
Also Read:
Congress Claims Support of 109 MLAs Amid Rumours of Sachin Pilot Rebellion

Addressing the media, Congress spokesperson Randeep Singh Surjewala said: "Ahead of the meeting, I will request all MLAs to attend to support and help strengthen the party. I agree there might be differences which are normal in any political situation. But weakening your party and giving the BJP an opportunity to attack us isn't right. No matter how high your position is in the party. The government here was chosen by the public. Our doors are open for Pilot's supporters. We can always sit and resolve the issue together. Keep your views within the party and not outside."  On Sunday night, the Congress high command sent Randeep Singh Surjewala, Ajay Maken and Rajasthan General Secretary in-charge Avinash Pandey to Jaipur. After reaching Jaipur, the three leaders held a press conference late at 2.30 am. In the press conference, Avinash Pandey said that 109 MLAs have already given a letter of support to Congress Party and Chief Minister Ashok Gehlot and many other MLAs are still in touch with him and they will meet on Monday.

A whip has been issued to all party MLAs to be mandatorily present at Congress Legislature Party meeting to be held tomorrow morning. Strict disciplinary action will be taken against any MLA who is absent without mentioning personal/special reason: #Rajasthan Congress in-charge https://t.co/adTEHg0iM1 pic.twitter.com/xrdqiCYNn9

On Sunday, Sachin Pilot had said he has the support of more than 30 MLAs and speculation was made that he would join BJP. Meanwhile, the former Congressman Jyotiraditya Scindia tweeted that he is saddened to see Sachin Pilot being sidelined and persecuted by Rajasthan CM. It shows that talent and capability are not valued in the Congress.

Sad to see my erstwhile colleague, @SachinPilot too, being sidelined and persecuted by Rajasthan CM, @ashokgehlot51 . Shows that talent and capability find little credence in the @INCIndia .

Earlier, the Rajasthan Special Operations Group (SOG) issued notices to the Chief Minister, Deputy Chief Minister, government chief whip and other MLAs for recording their statements in the alleged conspiracy to destabilise the state government. CM Ashok Gehlot on Saturday alleged that the BJP is trying to bring down his government by offering Rs 15 crore to his MLAs. It is being told that the reason for Sachin Pilot's displeasure is ignored by CM Gehlot and the Congress party. The latest tussle being the post of Rajasthan Congress Chief. For the last 7 years, Sachin Pilot is the President of Rajasthan Congress and he wants that someone close to him gets the command of the post of President. But CM Ashok Gehlot does not want to give this position to any of the Pilot’s loyalists.