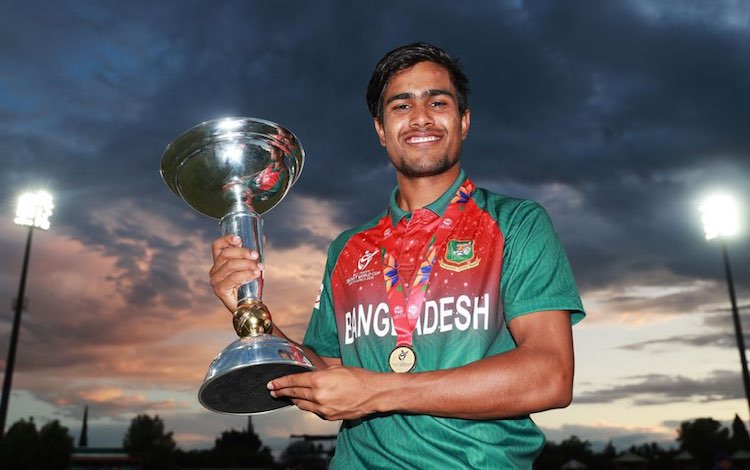 Bangladesh wrote their name on the ICC U19 Cricket World Cup trophy after a rain-affected three-wicket win over previous holders India in Potchefstroom. In what was their first final in the competition’s 22-year history, the Tigers were far from overawed by the occasion, limiting India to just 170 with the bat despite Yashasvi Jaiswal’s swashbuckling 88. Also Read: From Riches To Rags: Anil Ambani Tells UK Court His Net Worth Is Zero

And though for a time it looked as though they would fall short in their chase, a captain’s display from Akbar Ali steered home the ship, as his unbeaten 43 carried them to the target despite rain playing its part.  Celebrations were jubilant as Bangladesh’s heroes toasted a historic victory with a lap of honour in front of their travelling fans. In a low-scoring thriller, Bangladesh reached their rain-adjusted target of 170 with 23 balls to spare, as they won a historic maiden title while ending India's unbeaten run in the campaign. India suffered an incredible batting collapse, where they lost the last seven wickets for just 21 runs and were bowled out for 177. Yashasvi Jaiswal (88) and Tilak Varma (38) had top scored, while Avishek Das (three for 40) and Tanzim Hasan Sakib (two for 28) picked up the crucial wickets for Bangladesh. In their chase, Bangladesh lost wickets on a regular interval with Mohammad Hossain (47) and captain Akbar Ali (43 not out) keeping the innings calm as they crossed the winning line for a memorable victory. India's Ravi Bishnoi (four for 30), the tournament leading wicket-taker, once again impressed as he did his utmost to halt Bangladesh’s progress.  Skipper and Man of the Match Ali said: "It is all about the hard work that we have put in, in the last two years. I can't thank the coaching enough. When we started this journey we wanted to play in the final and win the trophy, and it is a dream coming true. I can’t describe my feelings right now, I am so happy. “Congratulations to India, who have been brilliant throughout the tournament. It has been good experience for the team, hopefully we can build on this. India captain, Priyam Garg said: “We are disappointed, in terms of planning today we had certain things in place, tried to put it in the right areas and I think overall we did bowl well. The result didn’t go our way, but we had a good tournament.” Brief Scores
TAGS ICC U19 Cricket World Cup 2020