Assam, India’s most flood and erosion-prone state, has witnessed 129 lives lost (including 26 from landslides) as of Tuesday afternoon and at least scores of wild animals dead, including eleven rare rhinoceros. Over 2,500 villages are affected by the rising Brahmaputra which is expected to rise further, paving way for another wave of floods as the state braces for more rainfall.
Also Read:
Agra: Outrage as Dalit Woman's Body Taken Off Funeral Pyre by Upper Castes

According to the Assam State Disaster Management Authority (ASDMA), more than 26 lakh (2.6 million) people in 28 of the state’s 33 districts are adversely affected. Many villages are completely submerged while others are cut-off from the mainland. 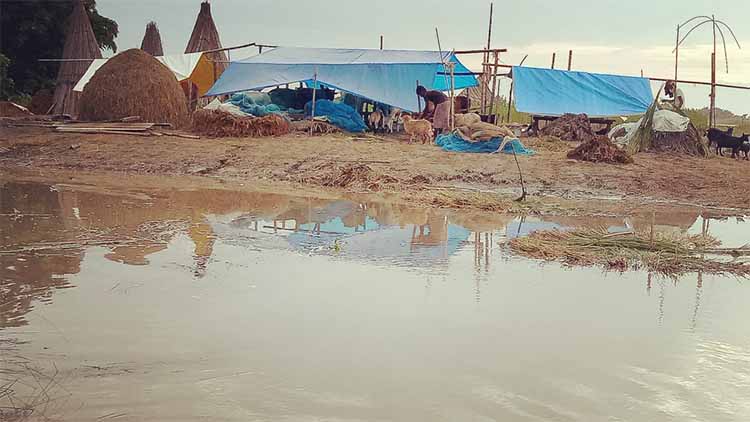 The largest of the ‘seven sisters’ states, Assam provides India’s biggest tea exports, boasts the largest river island in the world, has 70% of the planet’s one-horned rhino population and it also among the highest biodiversity regions on Earth. Running through the heart of the state is the Brahmaputra, the second-largest braided river in the world, known for its meandering courses. Millions rely on the vast river for their livelihood but life on the edge of the Brahmaputra is not easy. Farming is the main occupation of Assam, where 95% of people rely directly or indirectly on land. A risky business considering at least 23% of the state’s cultivable land is susceptible to floods. Rafiqul, a farmer in the Patharsali village of Barpeta district, recounts how his family was looking forward to the harvesting season this year to make ends meet. ‘But the floods brought about severe devastation. The recurrent waves of the flood didn’t allow us any time to tend to the farms. Our entire yield has been destroyed and our tin shade house, completely submerged’, he said. At least 150 families from Rafiqul’s village were forced to evacuate and move to relief camps in Chatala Char, one among the 304 set up by the state government. A ‘char’ is a riverine island on the Brahmaputra that is subjected to erosion on its upstream and deposition on downstream. 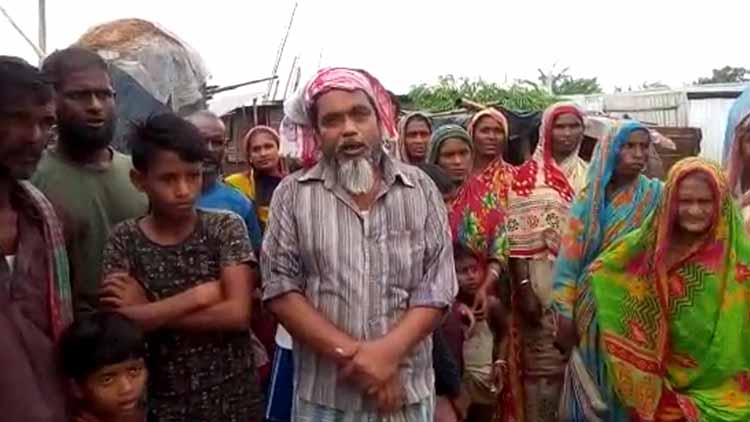 (Rafiqul and his fellow villagers at a relief camp in Patharsali, Barpeta)

Though each family now receives a weekly aid of rice and dal, they want to be rehabilitated in order to kickstart their livelihoods. “Our entire village has been devastated but we somehow evacuated with whatever cattle we could. We urge the government to provide us some economic help so we can farm again. So many of us are homeless and have lost farmlands”, said Rafiqul. Climate change has made the monsoons more unpredictable. Each year, thousands of families are displaced due to high-intensity floods and erosion. The districts located in the lower course of the Brahmaputra like Goalpara and Barpeta, known as climate change hotspots, are among the worst affected. Large parts of these districts are remote and have not seen the fruits of development in any significant manner. Inadequate growth of transportation, surface roads, infrastructure like health services and safe drinking water and education leads most young males between the ages of 16-35 years to migrate in search of better opportunities. Migration, a consequence of recurrent floods Displacement for people due to erratic and extreme weather, a fallout of climate change, has become a scary reality for millions of people across Assam. This is the seventh time 32- year-old Mainul Haque, a resident of Dakshin Goudhani village of the Barpeta district, has had to move in the last 15 years. His father Sadek Ali, a farmer, has had to relocate 21 times after floods ravaged his crops and house. Despite the challenges, Mainul completed his higher secondary education but, unable to enroll in a vocational programme, he was forced to join his two brothers and aging father to work the fields.

(What remains of Mainul's house)

In 2019, Mainul finally decided to move to Kerala in search of a job. “In a year, I earned 80,000 rupees by working as a painter. Enough for my wife, 2 children, and my parents but with the lockdown in place, I don’t know when I can return to work because here, we lose everything each year and get no reassurance towards a better future’, Mainul said.

(Mainul and his family soon after he returned from Kerala)

Young men from the char villages migrate on a temporary basis to find labour-intensive jobs and remit their modest incomes back home. Asked if he’d like to stay in Assam once COVID-19 is contained, he replies, “my older son is of school-going age but the schools, even without the Pandemic, do not function here. Neither are there teachers nor is the infrastructure flood-resilient. Under these conditions, my son will never be educated and be able to leave this cycle of refuge and poverty. I want him to go to school in the city”. Experts suggest those migrating from Assam are not just emigrating from the state in search of jobs but also as an adaption strategy to deal with the floods. Prof. Arupjyoti Saikia, a Guwahati based environmental historian at IIT, says, “increasing population growth and environmental constraints in char areas hardly allows communities to keep momentum with the rhythm of the river. More and more of these vulnerable people have little choices but to move out”. Those lacking the resources to migrate remain trapped in the cycle of intra-region migration due to environmental reasons. The cost of climate-induced migration Residents at the relief camps in Goalpara district say the floods have destroyed all the hand pumps, the main source of clean water. Despite government efforts, there are still communities that remain on makeshift highlands and boats as relief camps do not have enough capacity to provide shelter to all. Community leaders like Ashraf-Ul point out that relief efforts dwindle as the monsoon retreats because authorities and funders believe that most people return to their homes. On the contrary, most families have nothing to return to and remain permanently displaced, hoping to resettle in a different place. Assam’s diverse ethnic composition, history of local conflict coupled with a slow economy and limited resources, often makes the state susceptible to migrant-host conflicts. Dispossession of land leads to communities clearing dense forests to cultivate newer lands. Thus, floods caused by deforestation and climate change result in further degradation of the environment.

The vulnerabilities of migration from Assam are manifold making the role of the Assam government crucial in managing the complex issues arising out of climate-induced migration. Professor Saikia, highlights that policies should have a multi-pronged approach and that “any major developmental intervention in char villages requires much deeper understanding of the local ecology keeping in mind historical and environmental factors.” The government needs to safeguard the interests of these migrants by increasing economic opportunities and creating awareness about the climatic crisis of the Brahmaputra river which will allow urban Assam to be more welcoming towards the climate migrants.