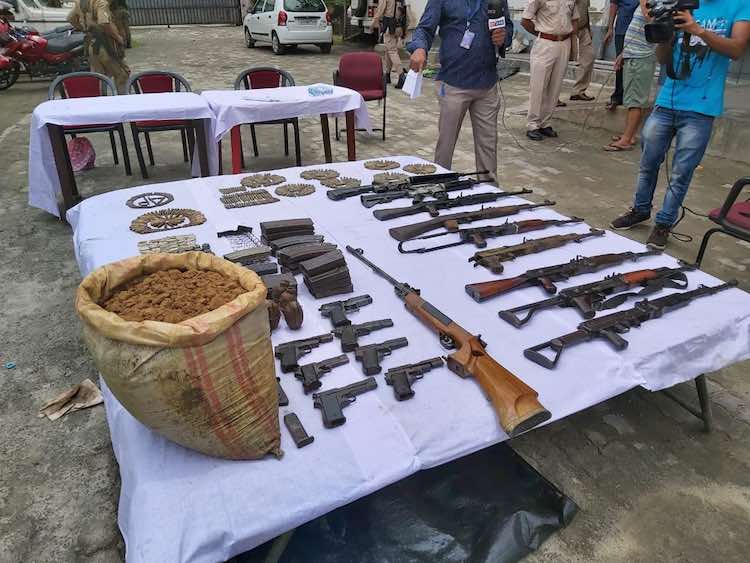 Ahead of Independence Day on August 15, the Assam Police has recovered a huge cache of arms and ammunition from Udalguri district. According to the State Police, this is a huge success as many militant organisations gave a boycott call of Independence Day this year as well. These weapons could be used to create unrest in the state.
Also Read:
Two J&K Cops Killed In Terrorist Attack On Outskirts Of Srinagar

The action was carried out in a joint operation by Guwahati city Police and Udalguri Police, which was headed by Police Commissioner of Guwahati City and ADGP of the Special Branch of the State intelligence unit, Munna Prasad Gupta. According to the Assam Police, the recovered weapons included two AK 47 rifles, five AK-56 rifles, two M-16 rifles, seven 9 mm pistols, 23 magazines, 36 hand grenades, five bombs, seven 40-mm grenades, more than 500 rounds of bullets, 200 detonator caps and 20 kg extremely powerful explosives.= ADGP GP Singh of Assam Police law system has tweeted that the quest to make Assam weapon-free continues. Arms have been recovered from Udalguri but no arrests have been made. An investigation is going on in this case.

Every year, militant organisations in the northeastern states, including Assam, announce a boycott of Independence Day, due to which security agencies remain on alert. This year too, the state police had received intelligence that militant groups can spread terror to disturb peace on Independence Day. Security agencies have become more alert after the weapon seizure. State police, paramilitary personnel and army personnel are continuously conducting raids.