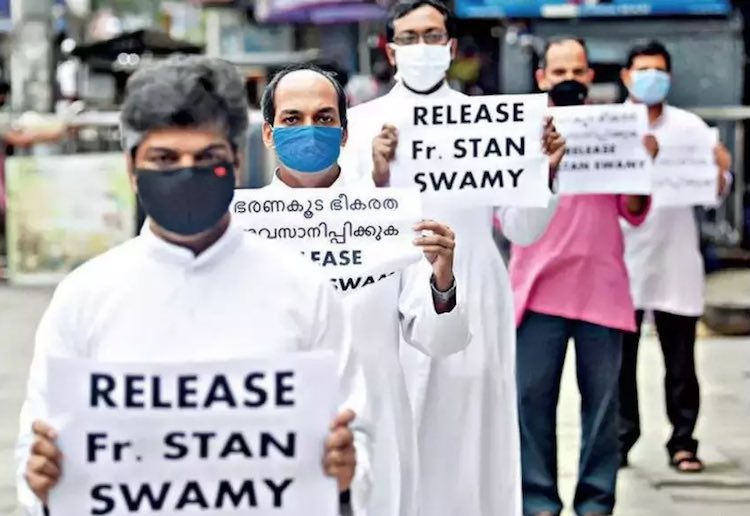 A large number of protesters formed a 3-km long human chain against the arrest of 83-year-old social activist Father Stan Swamy from Jharkhand by the National Investigation Agency. The protesters allege that the government has falsely detained Father Stan Swamy by making false allegations in the Bhima Koregaon case. On Monday evening, the human chain from Bengaluru’s Brigade Road to Shantinagar Bus Depot was formed under the leadership of Dr Peter Machado, the Metropolitan Archbishop of Bangalore. Dr Peter Machado, who was involved in the demonstration, said that all the protesters urged the government that the aged priest be released immediately. The government should encourage Stan Swamy as he was working under the Constitution and for the poor. Ultimately, the poor are our backbone”.

Thousands of protesters on the streets of Bengaluru held posters that read, "Release Stan Swamy", "We Want Justice for Stan Swamy, Release Him Now", "Stay with Father Stan Swamy", and "Save Democracy, Justice for Father Stan Swamy" and so on. Despite the rain, the protesters continued with their protests. Congress MLA Bhushan Bada from Simdega, Jharkhand alleged that the NIA team has arrested human rights activist Father Stan Swamy at the behest of the BJP and the government should release him immediately. On October 9, the NIA had arrested Father Stan Swamy from his Ranchi residence in connection with Bhima Koregaon violence case in Pune on December 31, 2017, which left one person dead.