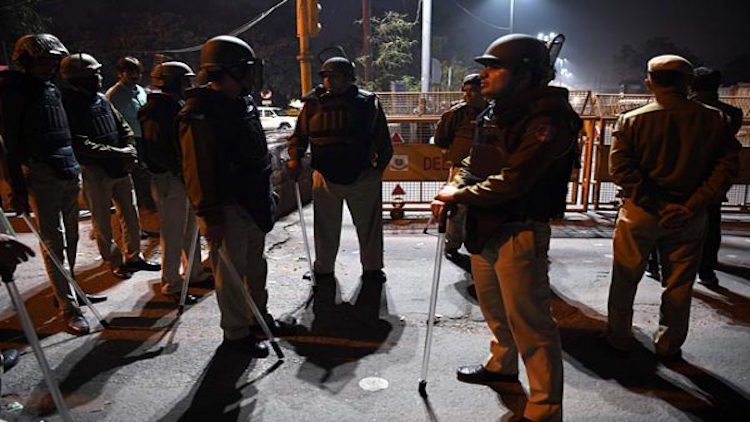 Communal rioting in northeast Delhi has claimed at least 20 lives with over 200 injured including several policemen. Stone pelting, arson and vandalism marked the Tuesday violence over the  Citizenship law. Three days into the violence, the Delhi High Court asked the city police to file a status report on the matter, while the NSA Ajit Doval late Tuesday night visited riot-hit areas along with cops including Commissioner Amulya Patnaik amid curfew.
Also Read:
Delhi Police Caught In Controversy Over Violence In City

Petitions seeking FIR in Delhi violence will be heard in Supreme Court on Wednesday. In a midnight hearing, the Delhi High Court ordered the city police to ensure safe passage of about 22 riot victims from a “fairly small” hospital in northeast Delhi to a government hospital with better facilities. Around 20 people were detained until Tuesday night, while 67 companies of police and paramilitary personnel have been deployed including ITBP, BSF and CRPF, the police said. Section 144 has been imposed in the affected areas and the atmosphere of tension remains intact. Prohibitory orders have been extended till March 24. Meanwhile, a shoot-at-sight order has been issued in the violence-hit areas. Home Minister Amit Shah, who had held high-level meetings thrice on Tuesday, is also likely to cancel his Thiruvananthapuram visit with the Delhi violence continuing. Meanwhile, the Home Ministry has appointed CRPF DG Training IPS SN Srivastava as Special Commissioner of Law and Order in Delhi Police with immediate effect. CBSE has also postponed the Class 10th and 12th board exams which were to be held in North East Delhi on Wednesday. Schools in the affected areas are closed for the second consecutive day as the tension grew.  Meanwhile, the Opposition parties are also targeting the government over the Delhi violence. Congress leader and former Minister of State for Home RPN Singh has sought the resignation of HM Amit Shah over the violence. Singh said, "if they are unable to stop the violence in Delhi, he should do some other work.” AIMIM president and MP Asaduddin Owaisi has also appealed to the PMO to deploy the army in the violence-affected areas of Delhi. He also said that the police have abdicated their duty and are colluding with the perpetrators of violence. Meanwhile, after BJP MP from Delhi Gautam Gambhir, now LJP MP Chirag Paswan has also demanded strict action against BJP leader Kapil Mishra accused of inciting violence in North East Delhi.