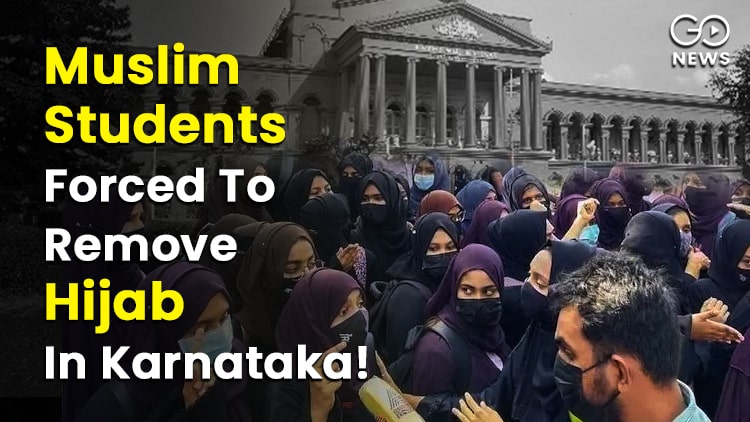 The Karnataka High Court will hear the case of the hijab restriction at Karnataka's PU colleges and schools for the fifth time today. In the state, schools up to class X were opened earlier on Monday. The school authorities did not allow Muslim girl students to enter the school/classroom wearing hijab because the High Court refused to grant temporary relief until the verdict is issued.
Many institutions made it clear to Muslim female students that if they wanted to enter the class, they had to remove their hijab beforehand. According to reports from several sources, Muslim female students were denied access to the school because they did not remove their hijab.
Also Read:
Karnataka HC: No Verdict In 'Hijab Ban' Case Yet, Hearing To Continue

On Monday, the government pre-university college for women in Udupi remained closed, as did other PU and degree colleges in the region. The Karnataka government stated that colleges would be closed on February 15 and 16. Muslim female students in North Karnataka, on the other hand, had no such issues. The school administrators here allowed female students to wear hijabs in class.
The Karnataka High Court will hear the case again today, February 15. The court hearing will begin at 2:30 p.m. On February 14, the court heard arguments about Article 25(1) and (2), attempting to determine if the government had broken the rules of this article. The petitioner's counsel, Devdutt Kamat, claimed in the High Court that the state government had broken the rules of Article 25. The government, he adds, feels that wearing the hijab is not protected by Article 25, but lawyer Kamat contends that this is completely incorrect.
It is up to the government, not the school or college, to decide whether or not female students should wear the hijab. He maintained that public order is the government's responsibility and that only the government can create rules about it.