Karnataka HC: No Verdict In 'Hijab Ban' Case Yet, Hearing To Continue 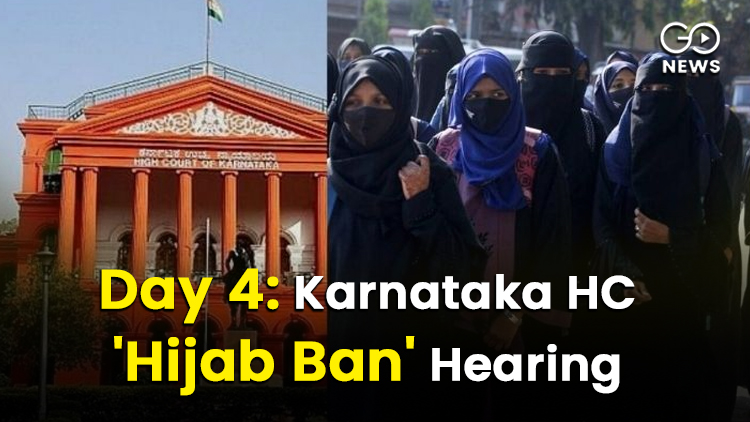 The Karnataka High Court has adjourned hearing on the hijab ban case for the day, and will resume tomorrow at 2.30 PM. The matter had been referred to a full Bench of three judges, Chief Justice Ritu Raj Awasthi and Justices Krishna S Dixit and JM Khazi on February 9 after it was heard by a single-judge Bench of Justice Krishna S Dixit. On Thursday, February 10th, the three-judge Bench had passed an interim order saying that neither hijabs or saffron scarves and shawls will be allowed inside the schools. The petitioners moved the Supreme Court against the interim order but it has not heard the matter yet.
Also Read:
TATA IPL 2022 Auction: Highlights

Main Updates From Today’s Court Hearing On Hijab Ban Case The Bench assembled at 2.44 PM for the hearing, and senior advocate Devadatt Kamat, appearing for the petitioners, said that the government’s orders are “in the teeth of Article 25” and termed it as “without application of mind”. He contended that the government order (GO) holds that firstly, hijab is not protected under Article 25 (right to practice religion) and secondly that it is the discretion of the College Development Committee to decide on the relevant exemption for the same. While senior counsel Kamat argued that the protection of Article 25 cannot be left up to the College Development Committee headed by an MLA since it is a matter of Fundamental Rights, CJ Awasthi replied that the question is whether Article 25 is an abslute right or subject to certain restrictions, and that “we are trying to understand whether by this GO, the State has restricted Article 25 or not.” Senior Counsel Kamat said that the state has a positive role in enforcing the guarantees of Article 25 and it cannot be restricted for one section because another section is opposed to such exercise. The Chief Justice replied that the State’s “understanding” the GO is not a violation of Article 25 since it is based on High Court rulings, to which Kamat responded that he would like to challenge this “understanding”. After referring to various High Court and Supreme Court judgements on the matter of exercising religious freedom vis-à-vis government oversight on the right, including the Bijoe Emmanuel Supreme Court case in which  expulsion of children for not singing national anthem because of their religious beliefs was deemed illegal.  Kamat contended that “College Development Committee has no statutory basis, [since], it is formed under a circular which does not pass muster for restricting public order”. Sr. Counsel kamatheld that the Essential Religious Practice (ERP) test canot be applied in this case as it is reserved only for situations in which someone else’s rights are affected or when the practice itself is “abhorrent” and against public order and morality. Countering ‘Law And Order’ Argument Given By Govt. The counsel for the petitioners held that “law and order” cannot be a valid ground for restricting religious freedom. He said: “When my religious freedom is being violated, can State take up a facile plea that this will create public order issue and hence we will restrict that religious freedom” He argued that the GO depended on the logic of “law and order situation” for its proscription of the hijab and without it the order itself would be null and void: “If the State says, it has nothing to do with public order, them the GO cannot stand scrutiny at all”. The Chief Justice, on the other hand, said that “the State is yet to take a stand” on this, while Kamat reiterated that law and order “is one of the grounds” on which the restriction on hijabs stands, saying: “The State is obligated to allow me to exercise my religious freedom”. Mandamus Demanded From Court To Allow Wearing Hijabs Kamat sought a writ of mandamus from the court instructing the concerned institutions to allow wearing hijabs for female Muslim students of the same colours as the uniform. Towards the end of the hearing for the day, Advocate Kaleeswaram Raj also requested to be heard for the petitioners before respondents begin their arguments. An advocate also mentioned that comments on media and social media be restricted in relation to the case, but the court denied this request. The hearing concluded for the day and will resume at 2.30 PM