If you want to know the deaths caused by Covid19 pandemic in India, you need to carefully read the Red Herring prospectus filed by the Life Insurance Corporation of India to Securities and Exchanges Board of India for its Initial Public Offering. India’s largest life insurer is preparing to offer 5% of its equity stock to the public which is billed as the largest IPO in Indian history. The company is worth more than Rs 5.4 Lakh crore according to the data supplied to the regulator.  But hidden in the data are the numbers of death claims the company has paid during the pandemic.

In the entire financial year 2018-19 more than 7.5 lak death claims were received by the LIC and it paid Rs 17128 crore as claims. Next year, just before the Covid19 hit India in March 2020, the number remains similar to 7.58 claims received by the company and Rs 17527 paid as claims. But in 2020-21 that included the first wave of Covid19 in India, the claims went up by nearly 25% to 9.46 lakhs and LIC settled these claims by paying Rs 23926 to its policy holders. In 2021 the data is available only for the first 6 months of the financial year. Total death claims zoomed to 7.93 lakh till September and the LIC paid Rs 21734 crore which is 92% of the previous year. The government has claimed that half a million people died due to Covid19 in the last two years. But given the low penetration of life insurance in India- only 3.2%- the numbers suggest that the fatalities could be many more than admitted officially. Six months data is yet to be made public by the company for FY 2021-22. Another blow to LIC by the pandemic was the disruption in the functioning of its agent who sell the policies to the public. From 75 million policies sold in financial year 2019, the number dwindled to 52 million in FY21. But the real blow came in the first half of FY22 where only 19 million policies could be issued in the first six months. Importantly for the first time, the individual policy numbers issued declined to a paltry 7m from almost 21 m during the first year of the pandemic. This shows that the demand of life insurance collapsed as people were hit economically by the second wave of the pandemic. 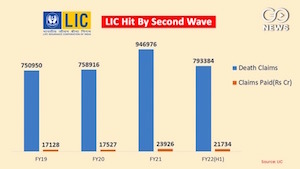 These trends also show that the IPO of the LIC maybe ill-timed when the financial numbers of the company are not very healthy and the business is not robust. This maybe the reason why the employees and trade unions are also wary of the listing of the company and propose to protest against the IPO move. ALSO READ: After Farm Laws, RSS Affiliate Opposes LIC IPO Move